The department confirmed it had, together with pesticide manufacturers, embarked on a process to have the pests controlled by various pesticides. 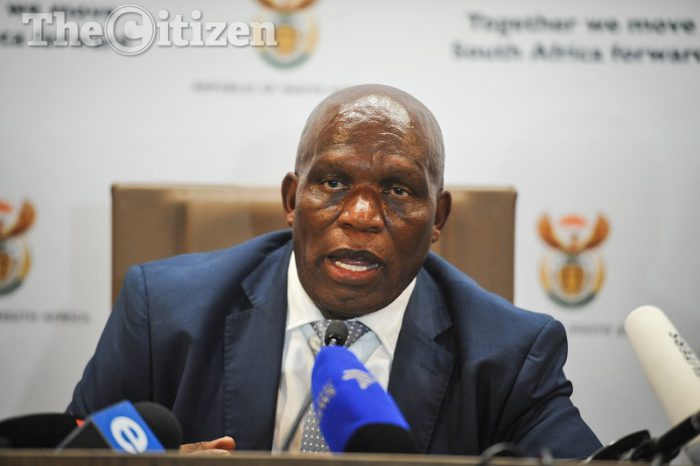 Mr Senzeni Zokwana, the Minister of Agriculture, Forestry and Fisheries is seen during a press briefing at GCIS, 6 February 2017, Pretoria. Picture: Jacques Nelles

Crop-eating fall armyworms (FAW) that have recently spread to parts of South Africa should not cause panic to farmers and consumers as the Department of Agriculture will take action to minimise the spread and damage of the pest.

Speaking at a media briefing in Pretoria on Monday, Minister of Agriculture, Forestry and Fisheries Senzeni Zokwana said the department received a diagnostic report last week, which positively confirmed the alien insect in Limpopo and Gauteng.

These were caterpillars that had to pupate and emerge as moths before a positive identification could be done, the department said.

As the FAW is a new pest in the country, no pesticides were registered to be used against it.

However, farmers can use other registered prescribed pesticides as the department applied for an emergency registration of relevant agricultural chemicals, registrar in the department Jonathan Mudzunga said.

“Since we heard about the outbreak, the department together with pesticide manufacturers embarked on a process to have the pests controlled by various pesticides. We have identified a number of chemicals that are already registered and we are confident that farmers who use the products according to instructions, will be use them safely.”

After undertaking sample collection in Limpopo and Gauteng, the department would undertake a comprehensive survey to determine the spread of the pest, Zokwana said.

“In parallel to this, damage assessment will be done and, as appropriate, the necessary actions undertaken to manage the pest. An awareness campaign has been rolled out to all provinces to provide technically correct information regarding the management of the pest.”

But a farmer in Ondersterpoort, north of Pretoria, told The Citizen on Monday that they detected the pest almost two weeks ago, which has spread to about 70% of the farm.

Jacques Prinsloo said they have spent over R60 000 in pesticide in the last week, in an attempt to control the FAW that had spread across their maize and lucerne crop, but nothing seemed to be working.

“We discovered them when we saw our plants were being eaten. My biggest concern is that the worms are in different stages, some have just hatched and others are much bigger. At this stage, no poison or pesticide is working,” Prinsloo said.

Zokwana said farmers would be advised on the correct quantities of chemicals to be used, as per guidance by pesticide manufacturers.

“No one should panic. We will use these pesticides in areas where there is an attack to deal with the fall armyworms.”

The pest, a strong flyer, could be distributed by winds over large distances