This after the party visited Mamelodi on Monday to hear some of the issues affecting young people. 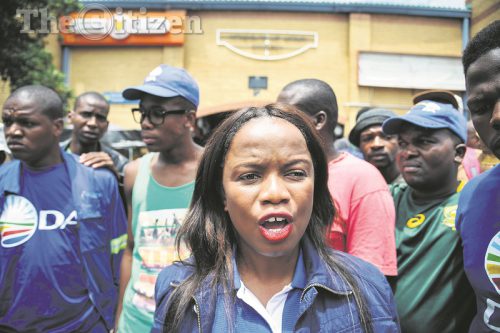 The youth of Mamelodi, east of Pretoria, raised concerns about unemployment and drug addiction, primarily among young people, with the Democratic Alliance on Monday, ahead of the state of the nation address (Sona) on Thursday.

The DA is consulting the youth across South Africa so that when the party responds to President Jacob Zuma’s Sona, they can share with him young people’s experiences.

DA national spokesperson Phumzile van Damme visited the Denneboom station and business precinct in Mamelodi on Monday to listen to the youth describe their problems.

“The DA believes that young South Africans are being denied work opportunities by systemic underskilling and educational shortfalls, and that President Zuma must address this critical issue in his State of the Nation Address 2017,” she said.

“We also want to hear if the youth has any creative solutions for South Africa.

“I have spoken to young activists who have done a great job in helping young people in the area to get jobs with business owners in the community and it is very positive.”

Van Damme said 40% of young people in Tshwane were unemployed.

“Our mayor, Solly Msimanga, is devoting a lot of time to creating job opportunities.”

Mayoral spokesperson Samkelo Mgobozi said there was obviously a link between unemployment, crime and drug abuse.

“The city has long recognised the problem with drugs in communities like Hammanskraal, Eersterust, Mamelodi and Soshanguve.”

Some money had been earmarked for rehabilitation facilities, but the former administration set aside “a lot of money for a lot of things, whether those things have been done is an entirely different story”.

Mgobozi said the new administration, through its social development department and with the member of the mayoral committee for community safety, was trying to ensure the affected youth were put to productive work and rehabilitated.

Abigail Feruzi, a seamstress and a Zimbabwean national, asked Van Damme if they could help provide more people with stalls from which to operate small businesses.