Police said the body fitted the description of the girl who was swept away during Thursday's flash floods.

The body of the young girl, suspected to be the one who was swept away during flash floods on Thursday, was found in Dube, Soweto on Friday, reports the Soweto Urban.

Joel Mabaso from Bramfischerville confirmed: “We have discovered a body and are waiting for forensics to confirm the identity.

“We are at the scene not far from Dube station – and we are waiting for the forensics and the police to arrive. The missing child’s parents are also here awaiting confirmation of identity.”

African News Agency (ANA) quoted Gauteng police spokesperson Kay Makhubela as saying: “Community members found the girl in Mofolo, and she fits the description of the girl that was swept by floods on Thursday, but we we will do the test to make sure that is her.”

Thursday’s flash floods had severely affected Alberton and surrounding areas in the south of Johannesburg, the Comaro Chronicle reported on Friday.

The heavens opened on Thursday afternoon and roads and homes were quickly flooded by the heavy downpour, which caused massive devastation and serious damage.

One homeowner in Toon van den Heever Street in Randhart said this was the second time this had happened to them in a few months. “We’ve just moved in six months ago and we had just started to recover from the last incident of flooding when this happened. We just don’t know what we’re gonna do, because we can’t go on like this,” said the devastated homeowner, who would like to remain anonymous. 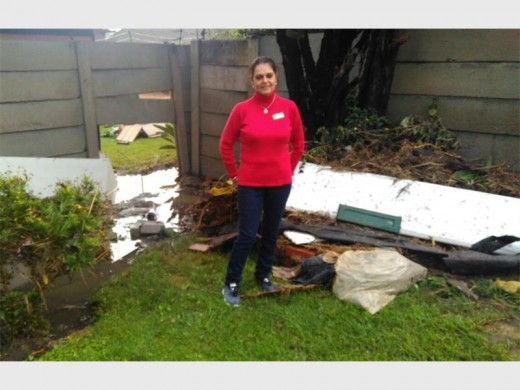 Ward councillor Marina van Wyk lends her support at one of the damaged homes in Alberton. Picture Comaro Chronicle

Aside from homes, the flash floods also had a profound impact on traffic on Thursday, with cars getting stuck and even crashing in areas like Rietvlei Zoo Farm, Renaissance Retirement Village and more.

The issues of outdated and unmaintained roads, inadequate stormwater drains and systems, along with the multitude of blocked drains and sewerage systems, all contributed to making the situation much worse.

Another affected resident said the municipality was the problem. “These drains are permanently blocked and they aren’t doing their jobs, simple as that,” she said.

Again a number of potholes re-appeared. Even before the flash floods, the RECORD posted questions to EMM regarding the potholes but they replied that they needed reference numbers in order to comment.

Damages in both Alberton and the south of Johannesburg were still being calculated.