R2K urged Sassa to ensure grant beneficiaries are paid on time and that they are not disadvantaged by any handover procedure. 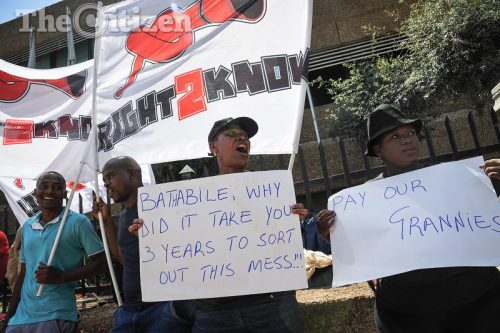 Right to Know members picket outside the SASSA offices in Pretoria, 13 March 2017, The picket revolves around the non payment of grants in April. Picture: Jacques Nelles

About 30 members of the Right 2Know (R2K) campaign protested outside the offices of the South African Social Security Agency (Sassa) in Pretoria on Monday in support of the Black Sash’s court application over the payment of Sassa grants.

Protesters want to make sure the deal with Cash Paymaster Services (CPS) does not disadvantage beneficiaries in the upcoming month. R2k says Sassa must account for delays and ensure all grants are paid on time and fully, with no more deductions from external companies.

The Black Sash wants the Constitutional Court to be made the gatekeeper on the terms of a new deal between Sassa and CPS to distribute welfare grants.

Last month, the Democratic Alliance released a statement saying that the department of social development and Sassa had failed to file papers with the Constitutional Court, leaving the 17 million South Africans who rely on social grants in the dark as to what will happen on April 1, when the contract with CPS expires.

R2K Gauteng provincial coordinator General Alfred Moyo said they called on Sassa to ensure grant beneficiaries are not disadvantaged by any handover procedure.

He said Monday’s protest was a build-up to their march on March 22.

R2K has been one of the key partners of the recent Hands off Our Grants (HOG) campaign to ensure that all grant recipients receive their grants in time, without unlawful deductions.

The movement claims Sassa has gambled with the livelihood of more than 17 million people and argue that Sassa had three years to fix their problems after their contract with CPS was declared invalid by the Constitutional Court in 2014.

They demanded that Social Development Minister Bathabile Dlamini resign or be fired.

The Black Sash case will be heard on Tuesday in the Constitutional Court.