‘The blacks are planning something big’ hoax tries to scare whites 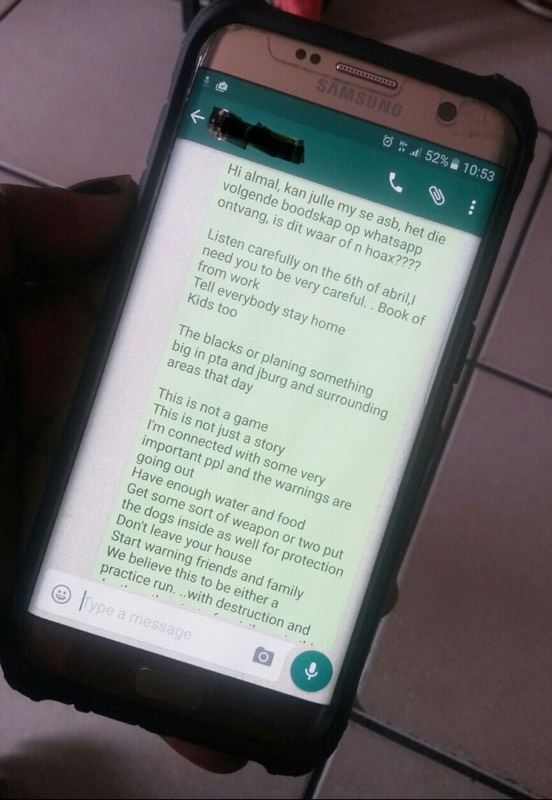 The text message going around Pretoria.

People all over social media platforms and WhatsApp crime prevention groups are scratching their heads, trying to figure out where the message is coming from.

The person who constructed the message said the following:

“Listen carefully. On the 6th April I need you to be very careful. Book off from work. Tell everybody to stay home. The kids too. The blacks are planning something very big in PTA and JHB and surrounding areas that day. This is not a game.”

The person then tries to persuade the reader of the above by saying it is not just a story, warning people to pile up on supplies.

“This is not just a story. I’m connected with some very important people and the warnings are going out. Have enough water and food.”

It also incites violence: “Get some sort of weapon or two. Put the dog/s inside as well for protection. Don’t leave your house! Start warning friends and family!”

The message continues to say: “We believe this to be either a practice run with destruction and death; or the start of the civil war in this country.”

It states further that this mass plan is going to disrupt all things possible, including cellphones, all highways and businesses.

The manufacturer of the message then goes on to say they hope they are wrong, but “Intel” from their side says otherwise. By “Intel”, they mean information of military or political value.

“Let’s hope we are wrong but the Intel at the moment says we are very right to fear. The chances of this spreading to other towns and cities are very good.”

The community crime prevention on social media administrator in the Moot, Susan Andrews, strongly condemns the legitimacy of the message.

Andrews advised that people should not go into panic mode.

“There are many well-informed people who will issue a warning to the right forums and that message will be shared as confirmed.”

She also called on the public to join their Community Policing Forums (CPF) to assist the police in crime prevention and to obtain skills in cases of emergency.

A post containing AfriForum’s logo was also distributed in Pretoria, warning people that the message was false, and encouraging people not to distribute it.

AfriForum, however, said they were not aware of it, as it did not come from their organisation. It said itwas distributed without their approval and the organisation dissociated itself from the content.

Police could not comment on the matter by the time of going to print.