If Nhleko's application succeeds, it will suspend Friday’s ruling and allow Ntlemeza to remain in his post pending the outcome of the appeal. 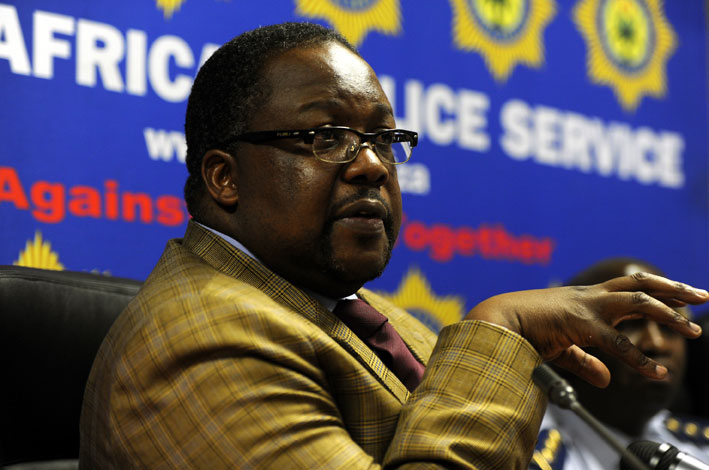 Police Minister Nathi Nhleko answers questions from the media at a news conference during a visit to the provincial head office of the SAPS in Parktown, Johannesburg, Tuesday, 19 August 2014. Picture: Werner Beukes/SAPA

Police Minister Nathi Nhleko wants the Supreme Court of Appeal to decide if a judgment which described Hawks head Major-General Berning Ntlemeza as lacking honour and integrity should ever have seen the light of day.

The minister on Monday filed an application for leave to appeal against last week’s judgment by a full bench of the North Gauteng High Court in Pretoria, which set aside Nhleko’s decision to appoint Ntlemeza as the National Head for Priority Crime Investigation as unlawful and irrational.

The judgment followed an application by the Helen Suzman Foundation and Freedom Under Law, which argued that the minister had ignored two judgments by Judge Elias Matojane, who set aside Ntlemeza’s decision to suspend Gauteng Hawks head Shadrack Sibiya for his alleged involvement in the illegal rendition of a group of Zimbabweans in 2010.

The full bench found there was direct evidence that Ntlemeza lacked the requisite honesty, integrity and conscience to occupy any position in public office, let alone one as important as the head of the Hawks.

If the minister’s application for leave to appeal succeeds, it will suspend Friday’s ruling and allow Ntlemeza to remain in his post pending the outcome of the appeal. The application came amidst accusations by the SA Policing Union that the minister was abusing the court process and applying “dirty delaying tactics” in a bid to stop Ntlemeza from losing his post.

The union has called for Nhleko to personally pay the legal costs should his application fail.

Nhleko’s main ground of appeal is that Matojane should never have heard the application about Sibiya’s suspension in the first place because it was a labour dispute which should have been decided on by the Labour Court.

He submitted that the full bench had erred in relying on the Sibiya judgment and the judge’s remarks as it was “a nullity by virtue of lack of jurisdiction”.

In the alternative, he argued that if Matojane had jurisdiction to hear the Sibiya case, the full bench had erred by relying on the judge’s remarks, which were made without giving Ntlemeza an opportunity to deal with it.

He further submitted the court had erred in finding he had been obliged to place the judgments before the interview panel and in implying that there were external influences in Ntlemeza’s appointment.

Blade Nzimande: ‘We have long been suspicious of Ntlemeza’