The hudges said the Hawks head had no prospects of success on appeal. 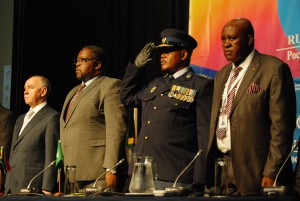 The national head of the Directorate for Priority Crime Investigation (the Hawks) Berning Ntlemeza has lost not only his bid to appeal against a court ruling which set aside his appointment, but will have to vacate his office despite any further pending appeal process.

A full bench of the High Court in Pretoria on Wednesday dismissed Major General Ntlemeza’s application for leave to appeal against their ruling on March 17, which set aside former police minister Nathi Nhleko’s decision to appoint Ntlemeza to the top post.

The judges said he had no prospects of success on appeal.

The court thereafter granted an order to the Helen Suzman Foundation (HSF) and Freedom Under Law (FUL) to enforce their March 17 ruling despite any possible pending petition to the Supreme Court of Appeal for leave to appeal or any further appeals.

This means that Ntlemeza, who remained in his post after March 17 because of his pending appeal, will have to vacate his office even if he manages to get permission to appeal the full court’s ruling.

Deputy Judge President Peter Mabuse and Judges Jody Kollapen and Selby Baqwa said they would give reasons for their ruling at a later stage.

Former police minister Nathi Nhleko initially also applied for leave to appeal against the ruling, but his successor Fikile Mbalula withdrew the application.

The full bench in March set aside Ntlemeza’s appointment, finding that Nhleko had ignored scathing judgmnts by Judge Elias Matojane, who set aside Ntlemeza’s decision to suspend Gauteng Hawks head Shadrack Sibiya for his alleged involvement in the illegal rendition of a group of Zimbabweans in 2010.

The full bench found there was direct evidence that Ntlemeza lacked the requisite honesty, integrity and conscientiousness to occupy any position in public office, let alone one as important as the head of the Hawks.

Ntlemeza contended the ruling harmed his “impeccable reputation” and that he should get “a second chance” to clear his name, as he was in the twilight of his career and needed certainty about his future.

Counsel for HSF, Carol Steynberg SC, argued that Ntlemeza could not pride himself on an unblemished reputation in light of the court’s remarks about his lack of integrity.

“We have a man at the head of a critically important institution who should not be there, not only because the process was flawed but because he is dishonest … From the day of his appointment his decisions were unlawful. The court has the authority to stem the tide of unlawful decisions now,” she argued.

December 2014, Minister of Police Nathi Nhleko suspends Anwa Dramat, implicating him in the “renditions” and appoints Ntlemeza as acting head of the Hawks on the same day.

13 January 2015, Forensic consultant Paul O’Sullivan spends about two days with with a police official in Limpopo listening to his story, and subsequently opens a docket with Ipid (Robert McBride was still executive director).

22 March 2015, High Court Judge Elias Matjoane says of Ntlemeza, while dismissing his application to appeal the earlier ruling in favour of Sibiya: “I am of the view that the conduct of the third respondent shows that he is biased and dishonest. To show that the third respondent is biased lacks integrity and honour, he made false statements under oath.”

23 March 2015, McBride is suspended from his position as executive director of Ipid. (Investigating O’Sullivan’s docket against Ntlemeza and Phahlane), subsequently overturned by the Constitutional Court.

February 2016, Nhleko appoints the controversial Prince Mokotedi as Gauteng Hawks boss. Mokotedi had no security clearance, had left the NPA under a cloud to avoid a disciplinary matter and would not have passed probity tests as he had high court judgments against him in excess of R1.1 million. O’Sullivan had opened a docket against him in 2012 and called his appointment to the police into question.