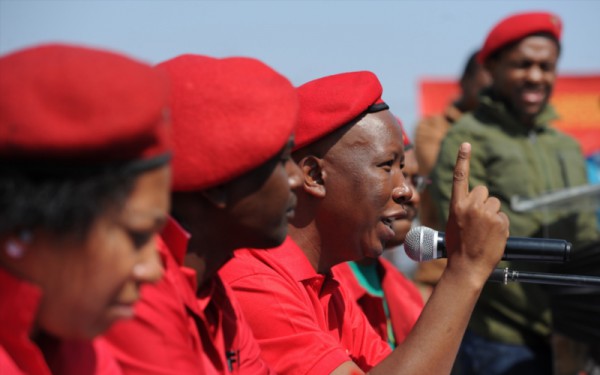 EFF leader Julius Malema speaks during the party's media conference regarding coalitions on August 17, 2016 in Alexandra, South Africa. The EFF announced that it will not form coalitions with other parties but would vote for the DA in the big cities. (Photo by Gallo Images / Beeld / Felix Dlangamandla)

The EFF on Tuesday announced its decision to join the UDM’s Constitutional Court application to have a motion of no confidence vote in President Jacob Zuma decided by a secret ballot.

This after it had earlier been reported that Zuma had filed an opposing affidavit to the UDM’s application, arguing that the ConCourt was silent on motions of no confidence being conducted by secret ballot.

National Assembly Speaker Baleka Mbete also filed opposing papers, saying that while she was not averse to the vote being conducted through a secret ballot, she had “no authority or discretion” over the matter, according to the Constitution.

The UDM was granted access to the ConCourt over the matter and was given until 4pm on April 19 to file its reply.

The party’s court bid followed Mbete’s assertion that there were no parliamentary rules that permit the vote of no confidence in the president through a secret ballot.

In a statement, the party said the move to join the UDM’s court bid was fuelled by Zuma’s “moral degenerative move” to file opposing papers.

“Zuma has opened a way for the EFF because we reject and despise the self-centred and selfish way in which he wants to dictate how MPs should express their confidence or none thereof in him.

“When he launched opposing papers of a motion that will be about him, he declared war against the very freedom we believe the secret ballot seeks to protect.”

The party also said Zuma, representing a different state organ, “should have allowed parliament to resolve its internal processes with the guidance of the courts” rather than attempt to interfere.

“How lowly must a leader in a democratic society be that, like Zuma, he wants to hold on to power at all costs.”

The motion of no confidence was set to be debated on April 18 but was postponed following a request from the Democratic Alliance.