Russian adventurer arrives in Pta after 33 months on the road

‘I did this to show my children that big dreams are possible if you push yourself.’ 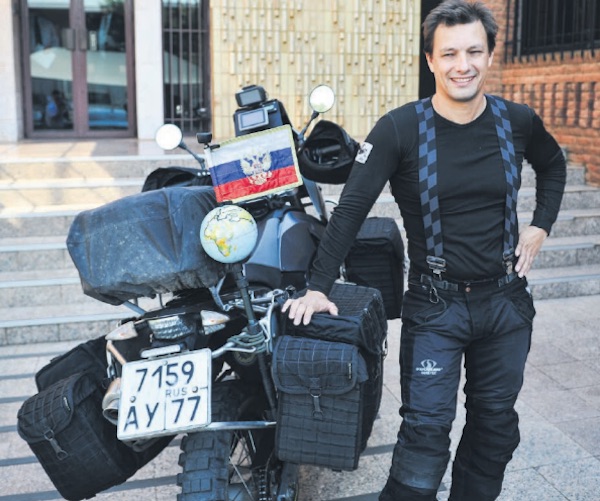 WELL-TRAVELLED. Adventurer Oleg Kharitonov poses for a picture next to his custom Russian-built motorcycle outside the Russian Embassy in Pretoria. Picture: Jacques Nelles

The 46-year-old husband and father of two closed his exhibition business and left Moscow in August 2014, to travel across 61 countries on a custom-made motorbike, he told The Citizen.

The touring bike was designed by specialists and engineered to withstand the strenuous conditions of travelling across the globe.

“This was my first grand adventure. I did this to set an example to my children that big dreams are achievable and you have to reach out and push yourself,” Kharitonov said through a translator.

“The bike was assembled in Moscow with different parts taken from other bikes and the engine was manufactured in Austria. There is no other bike like this one.”

This was the beginning of a challenging trip through the African continent. “It was my first time coming to Africa. I went from Morocco to Mali, Burkina Faso, Benin, Nigeria, Cameroon, Gabon, Republic of the Congo, Democratic Republic of the Congo, Angola, Namibia and reached South Africa last week,” he said.

But the trip was not smooth riding as it was marred with several incidents, which placed his life at risk.

He said he caught malaria in Nigeria, but only fell ill when he reached the Congo.

“The symptoms only manifested in the the Congo. Luckily, there were doctors from the Russian Embassy in Brazzaville who helped me through it.”

The eager traveller faced violence leaving him to fight off armed attackers in various African countries. “In Nigeria, Gabon and Cameroon, I faced armed assaults.

The worst encounter was in Nigeria when people blocked the road, turned my bike on its side and we had a scuffle. But in the end, I managed to talk myself out of it.

“When I reached Namibia, I went to a motor shop to buy a crowbar and it came in handy: after I left the shop, I was held up at knifepoint and managed to scare off the attacker. Fortunately, nothing was taken.”

The journey continues for the adventurer, who will be flying to Argentina next week to ride up the South American coastline into North America and back to Siberia, before heading to Moscow.

Rachel Dolezal: why ignoring the painful past of ‘passing’ is indefensible

There was nothing wrong with the hostage situation, insists military veteran
24 hours ago
24 hours ago
PREMIUM!

There was nothing wrong with the hostage situation, insists military veteran
24 hours ago
24 hours ago
PREMIUM!