The politician was convicted of murdering his then 24-year-old partner, Nosipho Mandleleni, in Yeoville in 2015. 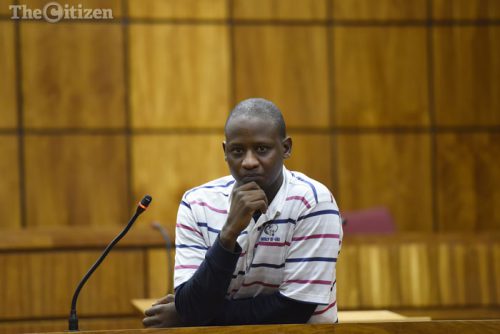 Murder accused Patrick Wisani pictured inside the Randburg Magistrates Court where he is representing himself, 25 October 2016. Picture: Refilwe Modise

Wisani was convicted earlier this year of one count of murder, one count of assault and one of intimidation after he beat and threatened to kill his deceased girlfriend’s twin sister last year.

He will serve 20 years for the murder count and one year each for the second and third counts, all of which will run concurrently.

While handing down his judgment, Judge Ismail Mohammed said he weighed several factors in the state’s case as well as his defence’s, including the Wisani’s lack of remorse, the brutality of the way in which Mandleleni died, but also his view that the politician was young and capable of rehabilitation.

Last month, Mandleleni’s mother Noxolo testified that she could not forgive Wisani, who defended himself through his trial, because he had never admitted to killing her daughter. Mentioning this testimony during the sentencing, Mohamed stated that Wisani displayed arrogance during the trial, calling all the state witnesses liars and showing no remorse.

He said the fact that Wisani went further, after his girlfriend’s death, to beat and threaten her sister displayed his unwavering disdain for women. Mandleleni was beaten with a sjambok and a broken broomstick and suffered more than 40 blows on her body, according to the forensic report on her death, and bled to death as a result of her injuries.

This, Mohammed said, showed that the deceased suffered a brutal, agonising and slow death.

While arguing for a minimum sentence last month, Wisani’s lawyer, Cronje Kriel said that his client was a well-educated, active member of the community in Yeoville and could still play a useful role in society.

Mohamed said on Thursday that it was unexpected that Wisani, who was clearly a man of considerable intelligence and education, could display the level of violence and disdain for women. He said such traits were more commonly found in areas of the world with archaic patriarchal cultures.

He found it especially ironic given the fact that, given his affiliation with the ANC, that he was meant to be nonracial and nonsexist.

The judge did, however, admit that there were exceptional circumstances that led him to believe that he did not deserve the maximum sentence of life imprisonment, given that he was a first-time offender in the prime of his life who could still be rehabilitated and play a productive role in society.