WATCH: Sandile’s Bible reading will be used to lighten his sentence – Bathabile Dlamini

'Once a man starts to tease you about your looks, if he becomes sarcastic and undermines you and uses derogatory words, don't stand for it! Leave,' Dlamini advised. 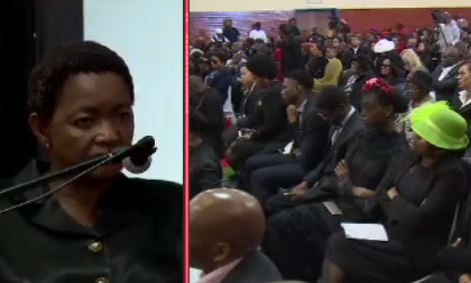 At Karabo Mokoena’s funeral service, minister of social development Bathabile Dlamini was one of the guest speakers. She delivered a 20-minute speech, mostly in isiZulu, which was well received by the attendees.

Towards the end of her speech, she warned, however, that a story making the rounds that Mokoena’s ex-boyfriend, Sandile Mantsoe, was a churchgoer and could quote the Bible verbatim was being used as a tactic to get him off on a lighter sentence.

She added the minimum sentence for the abuse of women was too light, and Minister of Women Susan Shabangu should advocate for a heftier sentence.

“There is a story that is moving around that he reads the Bible a lot. They are going to use that to mitigate for him to come out,” she said.

“There are issues that cut across political affiliation such as issues of violence against women. If a man abuses, he doesn’t choose if you live in a mansion or a normal house. He doesn’t care if you live in the township or if you are a minister. You could even be a professional woman; this happens, and it must be a lesson to all of us.

“We have to break the silence because if we don’t you will be counted as a statistic.

“Let us stop politicising issues that affect us on a daily basis because we are misleading our children. When I see Karabo’s picture, I saw a beautiful woman, a peaceful woman. The question that came to mind was: ‘Why would anyone want to kill Karabo?’ When I walked in here I saw a big plaque with a scripture from Corinthians. Love is not jealousy, it perseveres, love is patient. At Karabo’s home, they were taught about love, and when you have love, you tend to forgive easily.

“That’s why women suffer because we are led by emotion, and we always have hope that he will change.”

Watch the full video below