440% increase in violent protests over past 10 years – expert

Protest action is expected to continue, according to an expert. 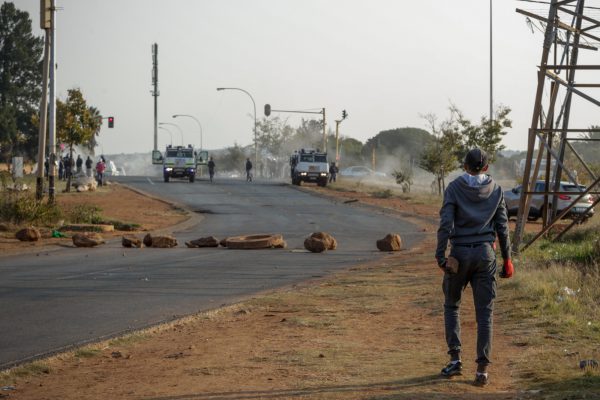 A young protester armed with bricks stands in a blocked road while police Nyalas monitor the situation in Ennerdale, Johannesburg. Residents in the area continued protests today against poor service delivery and lack of housing, which led to confrontations with police. 11 May 2017. Picture: Yeshiel Panchia

The general increase in community protests experienced over the past decade is likely to continue unabated, says a leading security expert.

Senior researcher at the Institute for Security Studies (ISS) Johan Burger said that over the last 10 years, there had been an increase of 40% in peaceful demonstrations.

The worrying issue, according to Burger, was an increase in violent incidents that have marred many protests.

He said there had been an increase of 440% in violent protests over the past 10 years.

“At the moment, I don’t see this changing any time soon,” said Burger.

“In fact, the protest actions that we have been witnessing in different parts of the country over the past couple of weeks are likely to continue.

“I’m also certain that many are also now nervously waiting to hear when the students will again take to the streets, demanding free education at tertiary level.”

Various parts of the country have, in recent weeks, been gripped by violent community protests, mostly sparked by lack of service delivery.

Police in Gauteng had their hands full trying to defuse what turned into volatile protests in areas such as Ennerdale, Eldorado Park and Finetown, in the south of Johannesburg Several shops were looted and vehicles were set alight. But following meetings initiated by government officials and the different communities, calm appears to have returned to those areas.

This week, the protest action moved to parts of Ekurhuleni, including Tsakane, Makause, Geluksdaal and Spruitview. Several people were arrested for inciting violence and public violence.

Spokesperson for the Ekurhuleni Metro Police Kobedi Mokheseng said the affected areas were quiet on Monday night and yesterday, but officers would remain there until calm had been completely restored.

More than 300 title deeds will be handed over to residents of Etwatwa.

The intention of the campaign is to deal with the title deeds backlogs in the province.

Eskom is hoping for a tariff hike. It may not get it