The third round of negotiations takes place on June 15, with employers offering only 5.3% so far. 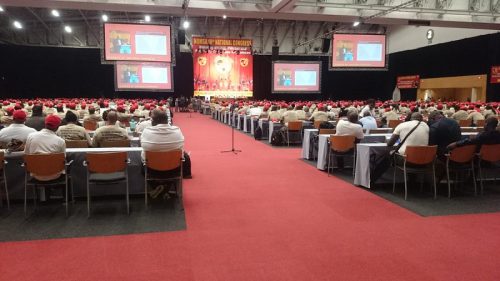 The National Union of Metalworkers (Numsa) is holding its National Congress in Cape Town this week. Photo: Andrea Chothia/ANA

The National Union of Metalworkers of South Africa (Numsa), the biggest trade union party to the Metal and Engineering Bargaining Council (MEIBC), has given employers within the sector one last chance to “present us [Numsa] with a proposal which our members can actually engage with”.

Phakamile Hlubi, the acting national spokesperson of the trade union, told The Citizen they were demanding “a 15% wage increase across the board based on the actual rate that a worker is earning, and not on the minimum rate”.

Thulani Mthiyane, the secretary-general of MEIBC, which services about 300 000 employees and more than 10 000 employers, confirmed that during the last round of negotiations, both employers and employees dithered as employers offered 5.3%, while unions demanded a 15% increase.

The unions are also demanding a two-year agreement, finalisation of other outstanding issues and extension of the agreement to nonpartisan and non-unionised workers within the sector.

One of the sticking points during the last round of negotiations was a demand from employers that new entrants to the sector not earn the full rate, but should instead earn 50% or half the minimum rate.

Employers reportedly also want companies that have been paying workers less than the sector-wide minimum wage of R40 an hour to increase wages in line with the new national minimum wage proposal of R20.37 an hour.

“Numsa is shocked by the offer which employers have placed on the table. The proposal can only be described as a down variation of the basic working conditions of workers and an erosion of all the gains we have made in the past 23 years,” Hlubi said.

Kaizer Nyatsumba, CEO of Steel and Engineering Industry Federation of South Africa (SEIFSA), which represents 25 employer associations, said their “members have been kept informed of developments in the negotiations so far, and they will continue to develop or revise our mandate as they see fit”.

Hlubi said despite this, Numsa has “taken taken the decision to reject the proposal outright”, as their “members have been living the life of junk status far longer than SA has been in junk status”.

“Our members are suffering more than anyone else in the current economic crisis, and they can barely get by on their meagre earnings. Our members cannot afford to raise their families with dignity on the meagre earnings that they receive from employers,” she said.