AfriForum may yet net Grace

Lobby group will first challenge her diplomatic immunity and could launch both a civil suit and criminal prosecution. 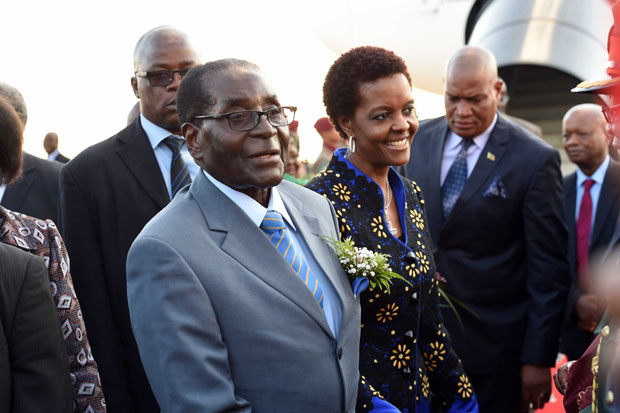 President of Zimbabwe Robert Mugabe is welcomed as he arrives in South Africa for a State visit with wife Grace. PHOTO: GCIS

Grace Mugabe may have gone back home yesterday under the cloak of diplomatic immunity, but she won’t be completely off the hook if AfriForum has its way.

The organisation is considering suing her in a civil case as she has assets (including a R45 million house) in South Africa.

The minority rights lobby group is preparing papers to challenge the decision by the department of international relations and cooperation (Dirco) to grant Mugabe diplomatic immunity, which effectively rendered the assault charge against her null and void.

Mugabe jetted back to Zimbabwe this weekend after disappearing when she was accused of beating and injuring a 20-year-old woman in a Sandton hotel room.

Last week, the police ministry alternated between saying she had handed herself in to police and that the ministry was negotiating with her lawyers, to eventually waiting for Dirco to decide whether her request for diplomatic immunity would be granted.

In the end, it seemed the arrival of her husband, President Robert Mugabe, who came to attend the Southern African Development Community (SADC) summit in Pretoria, marked the end of government’s efforts to pursue a criminal case against her. She reportedly left the country with her husband, diplomatic immunity having wiped her slate clean.

International Relations and Cooperation Minister Maite Nkoana-Mashabane said she had “agonised” over the decision to grant Mrs Mugabe immunity, taking into account the need to uphold the rule of law, maintain good relations within the SADC region and that “the matter” coincided with the SADC summit.

But Willie Spies, an AfriForum attorney, said the decision was taken irrationally and unlawfully and this would be the basis of their application to have it reviewed by the High Court in Pretoria in the next week.

“The important thing is the constitutional principle that any person in a public office may not take a decision that affects the rights of a citizen without the decision being made in a way that is fair and open to public scrutiny,” he said.

AfriForum is considering multiple angles to secure justice for Gabriella Engels. A civil suit, Spies said, could run concurrently with a criminal prosecution.

The group was also looking at pursuing a private prosecution, should the courts rule in favour of Mrs Mugabe.