New ANN7 boss issues a ‘warning’ to the private sector

Mzwanele Manyi says the media doesn't understand what it should be doing in SA. 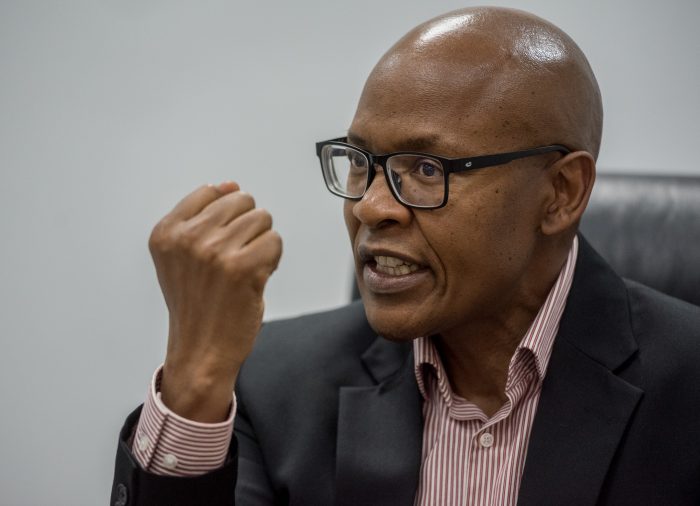 Mzwanele Manyi, the new owner of ANN7 and The New Age, declared yesterday “I call the shots”.

Manyi was sitting in what used to be the office of Atul Gupta before the family sold off its ailing media entities to him earlier this week.

The Gupta family, according to Manyi, has no more say in the operations of his companies, including, he added, the content and editorial direction of its news coverage.

He was responding to accusations that the entities were merely mouthpieces for the interests of the controversial family and its government-affiliated connections.

“Here, at ANN7 and The New Age, they [the Guptas] are not here; I have bought them out completely. This was Atul’s office, so they are out. This is why I can tell you everything I am telling you.”

Asked about the media house’s reputation as purveyors of pro-Zuma propaganda, Manyi was quick to laugh off the accusation.

To remedy this flaw in what he described as mainstream and white-owned media, Manyi said his new empire would be a voice for government stories other publications refused to cover. He also issued a warning to the private sector which, he said, was ripe for transformation.

His journalists would “come down hard” on the private sector.

“Everything is under review, we will review everything, but I think the line of march is transformation. We are unapologetic about that. So, we will do transformation stories … the biggest candidate for transformation in this country is the private sector.”

But his new role in the media space has not changed Manyi’s political stance. Manyi’s lobby group, the Progressive Professionals’ Forum, had earned a reputation as a staunch supporter of the ANC, particularly the party’s president, Jacob Zuma, and those closely associated with him in government, including former Eskom CEO Brian Molefe.

“The PPF is supportive of the ANC and we won’t apologise for that. We want the ANC to continue ruling in this country.”

Despite this, Manyi has said he has written to opposition party leaders, saying he would provide them with a platform on his publications.

Manyi admitted that his new acquisition was not making enough revenue but said the primary reason for that was that it had been owned by the Gupta family.

He said now that it was under new ownership, its credibility would improve, as would its financial prospects. – simnikiweh@citizen.co.za