Pupils boycotted lessons on Friday, demanding to be allowed to wear 'skinny pants'. 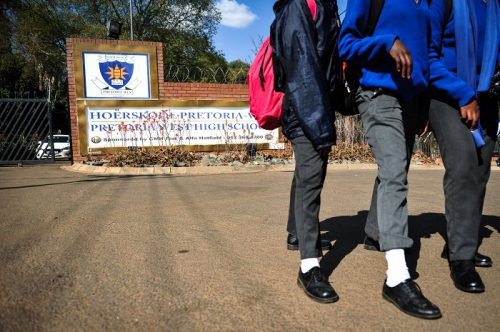 Some say the school uniform is a remnant of apartheid and an infringement of their human rights. Others say the baggy pants are “like parachutes”.

But whether their protests are political or fashion-based, the pupils of Pretoria West High School have forced their school governing body to vote on the issue.

The pupils boycotted lessons on Friday, demanding to be allowed to wear “skinny” pants, triggering a visit to the school yesterday by Gauteng education MEC Panyaza Lesufi.

Lesufi described the grievance as “petty issues”, but pupils told The Citizen yesterday that they felt they should wear anything of their choice as it should not “bother anyone”.

School governing body (SGB) chairperson Bryan Zuyster told The Citizen that a parents’ meeting would be held later in the week to vote for or against the pupils’ demands.

“In our country, majority rules. Whichever way the vote goes, the school will adhere to the parents’ desires. But the majority of e-mails coming in from parents have given it a thumbs down. The majority of the children weren’t even part and parcel of this decision,” he said.

Lesufi told the HuffPost he was worried about the clothing issue becoming one of security.

“Aside from the fact that the skinny pants will affect discipline, control and management within our school, I am worried because anyone can come in and out, and you won’t be able to recognise who the schoolkids are because of what they are wearing,” Lesufi said.

A Grade 9 pupil said he felt the uniform was linked to apartheid as it had not been changed since the school opened 70 years ago.

“This uniform survived apartheid and they want us to wear what they want. This is an apartheid uniform,” he said.

A female pupil said: “These pants do not look good on us. Look at them, they look like a parachute.”

But some pupils have described the grievance as “irrelevant”, saying they just want education, regardless of their attire. Classes resumed as normal yesterday morning, following disruptions on Friday.

The chaos erupted after two “unruly” pupils went against the code of conduct regarding the uniform,said Gauteng education department spokesperson Steve Mabona. The pair created a group on WhatsApp to mobilise their peers.

“Following a disciplinary process, the pupils received a sanction of a seven-day suspension. Their seven days lapsed on Thursday, when they began to coerce other pupils to force the school to allow them to wear skinny pants. Hence the disruption on Friday,” Mabona said.

Lesufi said in a statement that the issue should not be priority, as focus should be on enhancing quality education as the department was preoccupied by preliminary exams and preparation for final exams.

“It is unfortunate and disappointing that we are distracted by what we regard as petty issues, which should not be our priority,” said Lesufi.

Zuyster told Talk Radio 702’s Stephen Grootes that a letter was circulated last week calling on pupils to boycott classes because their rights were being violated.

“It’s quite a tricky situation we find ourselves in. We got a notice that the kids were going to protest because they needed to look fashionable and we have a problem with that as the governing body,” he said.

“Parents leave home at 5am for work so they don’t even know what the kids are wearing to school.” – rorisangk@citizen.co.za