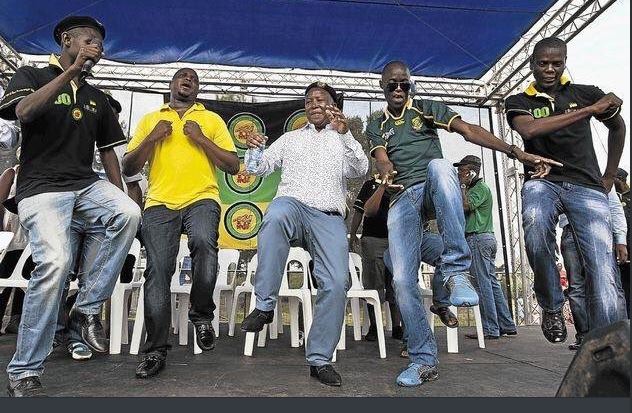 EFF leader Julius Malema has penned a heartfelt post informing South Africans that although he has refrained from attending other funerals for fear of his life, he would take the risk and attend that of former ANC Youth League secretary-general Sindiso Magaqa, who died on Monday.

Magaqa was a councillor at Umzimkhulu in southern KZN. He was rushed to hospital on July 13 after he was shot and wounded along with two other ANC councillors in what is thought to have been an ambush by unknown people.

He had been in hospital before succumbing to the gunshot wounds.

The 35-year-old was the secretary-general of the ANCYL before it was disbanded in 2012 after its leadership, under then league president Julius Malema, was found guilty of bringing the ANC into disrepute.

Malema and the ANCYL’s former spokesperson, Floyd Shivambu, were expelled from the ANC, while Magaqa was suspended from the party.

The EFF leader wrote a lengthy letter explaining how the news of his friend left him broken and in tears, and he had to turn back from a meeting he was driving to when he received a phone call telling him of the devastating news.

“The phone call carrying these sad news was brief and to the point, yet it froze my entire body in shock to the point of inevitable and unending tears.

“With immediate effect, my heart was overcome with sorrow and gloom at the death of a brother, my brother, a friend and a comrade that I had worked with at the height of our involvement in a movement and organisation, for a country and a people we deeply loved.

“I had to make a U-turn because I could not withhold my tears, which uncontrollably kept showering my face,” he wrote.

Malema said the last time a shadow of death overcame him in such a manner was on the occasion of the passing of his mother, Flora Mahlodi Malema, who reportedly died of an epileptic fit.

The EFF leader said he felt this way because he knew something could have been done to save Magaqa. He said he had never stopped talking to him about way he could serve the people of South Africa.

“Even at the height of reports of political violence in his home region, I contacted him, met with him to see how he could survive,” he said.

But the EFF leader could not save his friend as he ended up in hospital.

The EFF leader also used the same letter to criticise the ANC Youth League in KwaZulu-Natal for “inviting” him to Magaqa’s funeral, saying the league was only using the funeral to score political points.

“Nothing is more insensitive and an utter betrayal of African tradition than this shallow sickening fame-seeking call. I do not know of anywhere in our traditions where people get invited to funerals.

“The ANC YL of KZN could not even wait for Magaqa’a warm body to reach his family, they already took the platform to defile this morning hour with their fame-seeking calls. It is even more concerning that the ANC has not called the ANC YL in KZN to order, reminding them that the family has to take a lead on such matters.”

Among those who have been inviting him to Magaqa’s funeral may be the same ones who murdered him, and are probably plotting who to kill next, alleged Malema.

Though he refrained from attending the funeral of another comrade in the past because he had been warned of an assassination plot against him, Malema said his attendance of Magaqa’s funeral “will be on the condition of a thorough security assessment so that the bloodthirsty murderers do not take the occasion of his funeral to also end my own life”, he said.

We will always miss you, my friend, says heartbroken Malema