Muthambi previously worked as a Makhado municipal manager. She was suspended twice and charged with fraud and nepotism. BACK TO SCHOOL. Communications Minister Faith Muthambi is doing an MTech at the Tshwane University of Technology. Picture: Virginia Keppler.

The trio were served with letters of intention to suspend on Wednesday, in a move opposition parties have described as Muthambi’s attempt at subverting procurement procedures in the department.

Media reports circulating during the week indicated Muthambi’s frustration with the three top officials was their refusal to approve requests for expenditure that has nothing to do with departmental work or service delivery.

The Business Day reports the officials also refused to abide by Muthambi’s instructions to steer the department towards a path of fiscal recklessness, instead preferring to exercise financial prudence that Muthambi is averse to.

DPSA’s website boldly states the departmental strategy is building “a professional, productive and responsive public service and administration” through the establishment of “norms and standards to ensure that the state machinery functions optimally and that such norms and standards are adhered to”.

READ MORE: These are Muthambi’s pearls of wisdom from ‘hypocritical’ budget speech

Muthambi’s conduct since she was shunted to DPSA from communications, where her biggest contribution was exacerbating the state of paralysis at the SABC as confirmed by the ad-hoc committee report, she has exhibited signs of either thinking she is above the law or complete ignorance on what her department’s mandate is.

There are reports this morning that Muthambi’s consternation with her senior management team is their refusal to sign off on imbizos and roadshows, a trademark penchant dating back to her days as a relatively unknown minister plucked out of obscurity. Muthambi previously worked as the Makhado municipal manager, where she was charged with fraud and nepotism.

In August 2015, Muthambi flew her bodyguard, chief of staff and an assistant director in the department of communications to attend both the Atlanta Lifestyle Hub Show and the Santa Fe Folk Art Market events. The nine-day trip to a luxury goods show and folk art festival in the United States cost a whopping R593 516.18.

Muthambi failed to account to Parliament at the time as to what tangible and strategic benefits her department and the country derived from this excursion. Lifestyle Hub website indicates it is “a unique array of furniture, home décor, and giftware all handcrafted from hide, beads, clay or fine linen”, while the Sante Fe Folk Art Market is an exhibition of folk art from around the world.

Imbizos and roadshows appear to be Muthambi strategic focus

Upon her arrival at DPSA this year, Muthambi has seemingly continued her grotesque abuse of public purse for trivial purposes.

It emerged that she expanded her private office to 30 personnel, many of whom were her alleged relatives. In a parliamentary response to EFF’s Leigh-Anne Mathys, she admitted having spent R3.2 million on 10 imbizo shared with her deputy, Dipuo Letsatsi-Duba, in her first five months in office.

In May, Muthambi flew more than 30 people to Cape Town, where they were lodged in luxurious hotels, to watch her deliver her budget speech to the tune of R300 000. She denied wasting taxpayers’ money to the National Council of Provinces (NCOP).

“I was going to hold her accountable. I was going to ask her if she thinks this behaviour is acceptable. This is the reason she chose to miss the committee meeting. I was removed before I was able to do that,” said former public service and administration committee chairperson Dr Makhosi Khoza a few days after she resigned from parliament.

Public services and administration committee member for the DA Desiree van der Walt is not surprised Muthambi will want to suspend three top officials. Her hunch is that she wants to plunder the department.

“This [intended suspension] points to a rather obvious pattern which apparently started when she arrived in the department and demanded that the DG approve spending on imbizos. He [Diphofa] most likely had a difficult time understanding what the connection between this politically-motivated roadshows and the department are.

“She also wanted the DG to approve irregular appointments. It is is very likely the DG agreed with the auditor general that the minister failed compliance during audit. Muthambi will then accuse him of not being cooperative. If you noticed, during the last committee appearance the two [minister and DG] sat apart. She is not accountable,” Van der Walt said.

Pfarelo Maduguma, Muthambi’s spokesperson, was collegial until asked if Muthambi is the President Zuma’s worst performer and operating above the law. He requested the rest of the questions be emailed and terminated the call. The Citizen will publish the response. 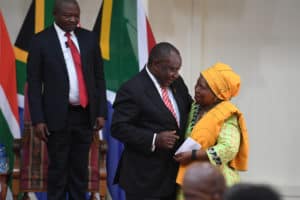 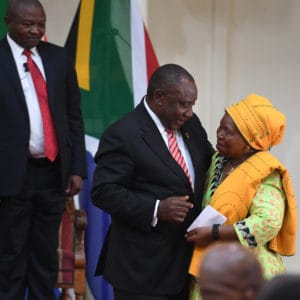 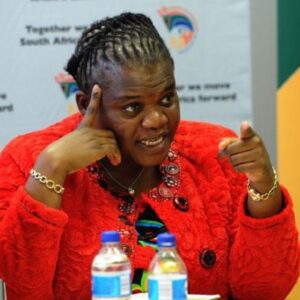 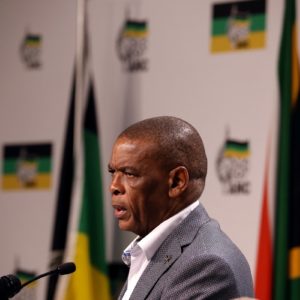