Zuma can go to jail if Shaik testifies – EFF

The party called on the president to step down and hand himself over to authorities. 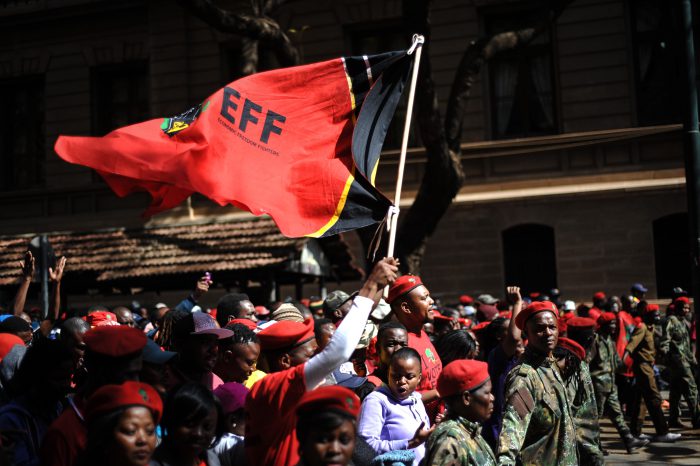 EFF supporters are seen marching from Church square to the Union Buildings, 8 August 2017, EFF members marched in support of the removal of the President, Jacob Zuma, Pretoria. Picture: Jacques Nelles

The Economic Freedom Fighters (EFF) have welcomed disgraced businessperson Schabir Shaik’s announcement that he would willingly testify against President Jacob Zuma should he stand trial over the 783 corruption charges he now may face.

Some of the charges were related to dealings he had with Shaik when he was his advisor. Shaik was was sentenced to 15 years in prison in 2005 on similar charges but was later released on medical parole.

The EFF was confident Shaik’s testimony could land Zuma behind bars.

“We must really welcome the noble commitment by Schabir Shaik that he will testify should Zuma appear in court. It is an important thing because that just means that Zuma is going to jail,” said Mbuyiseni Ndlozi.

Ndlozi said the party was still calling on the president to step down and hand himself over to authorities.

“It’s a cul-de-sac. We have called on Zuma to hand himself over and to step down. He said he is innocent, that’s what he’s been going around saying so he shouldn’t be scared to go to court. He must face the court, he must go and be answerable. We all must be answerable.

“We believe he must step down because of the Constitutional Court ruling that he broke the constitution. So we can’t have a president facing 783 charges.”

Last week the Supreme Court of Appeals dismissed an appeal by the National Prosecuting Authority (NPA) and Zuma against a High Court order which set aside the decision to withdraw charges against the president.

The NPA has since agreed to wait for Zuma to make submissions on the ruling before deciding to prosecute. – simnikiweh@citizen.co.za