Paint shop burns down in Pretoria

One person was treated for smoke inhalation and taken to hospital. 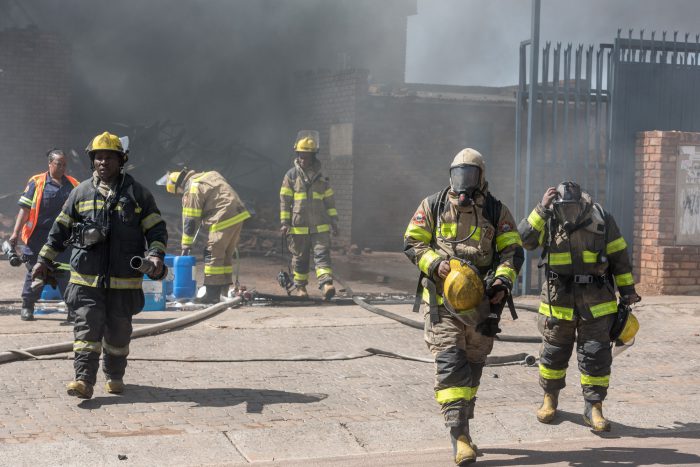 Firefighters leave a building warehouse during a fire at a paint store on Soutter Street in Pretoria West on 16 October 2017. The fire was compounded by flammable paints and thinners in the building. Picture: Yeshiel Panchia

About seven fire brigade stations had to be called for back-up after a paint shop in Pretoria West caught fire yesterday, leading to damage estimated at millions of rands.

The shop on Soutter Street was totally engulfed in flames after a gas bottle allegedly exploded.

According to Best Care ambulance services, the business across the paint shop heard people screaming, thinking it was a car accident.

“The place is a fire extinguisher shop. They used the extinguishers to try and kill the flames, but since it is a paint shop, the fire got out of control,” said spokesperson Xander Loubser.

One person was treated for smoke inhalation and taken to hospital. Loubser could not confirm if the man was an employee of the business.

“There were no other injuries. He was treated at the scene and taken to Pretoria West Hospital,” he said.

But the Tshwane emergency services had to call seven stations for back-up, with each team rotated every 20 minutes, spokesperson Johan Pieterse said.

“The fire was contained in the building which completely collapsed due to the high fire load and also because of products such as thinners, paint and car parts. The roof also caved in.

“We monitored the firefighters as it was a hot day and it’s difficult to fight fire in this heat. We managed to relieve our guys every 20 minutes by sending in a new team,” said Pieterse.

He said damage to the building would “run into millions” due to the structure being completely destroyed.

“The cars parked at the adjacent house also had heat exposure damage. A house on the premises of the burning building was also damaged.”

According to an employee of a business nearby, this was the third time the paint shop experienced a fire in the past two years. – rorisangk@citizen.co.za