The family turned to the court after then Home Affairs minister Malusi Gigaba granted the approval for VVIP immigration services in 2016, only to withdraw it a few days later. 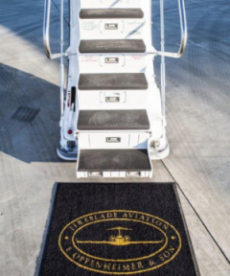 Finance Minister Malusi Gigaba had, when he was the Home Affairs Minister, granted permission for the Oppenheimer family’s Fireblade Aviation to run a customs and immigration service for international VIP’s at its seven-star terminal at OR Tambo International Airport, the High Court in Pretoria has ruled.

Fireblade turned to the court after Gigaba in January 2016 granted approval for an international customs and immigration service component at Fireblade’s VVIP Centre at the airport, just to withdraw his approval a few days later.

The Minister and Denel, from which Fireblade leases the premises, opposed the application, claiming Gigaba had never granted such approval and that Fireblade was in breach of Denel’s security obligations.

Judge Sulet Potterill ruled that Gigaba had in fact granted the approval for the customs and immigration service at Fireblade’s centre to be conducted by officials of the Border Control Operational Coordinating Committee and not Fireblade’s employees.

She declared that the Ministerial approval was of force and effect and could be implemented and relied on by Fireblade and that the (new) Minister (Ayanda Dlodlo) could not revoke the approval without due cause.

Judge Potterill rejected the Minister’s argument that Fireblade’s intention was “to create an island for the exclusive use of the Oppenheimers and the like”.

“The whole nature of flying is exclusionary; a business class passenger stands in a different queue and some passengers may use the business lounges and others not… There is a vast difference between commercial flying and chartered and private air transport,” she said. She also rejected argument that the cost would be too high as Fireblade had undertaken to carry the costs relating to the immigration facility.

She rejected the Minister’s claim that there “should have been a competitive and fair process” as the state did not solicit goods and services for the Fireblade terminal and did not pay any entity while Fireblade leased the property from Denel for commercial purposes.

The Gupta family has been fingered as using its influence at Denel (which initially supported the project in glowing terms) to press Gigaba to deny the application after their alleged bid to force Fireblade to include a black economic empowerment partner failed.

Judge Potterill said it was common cause that Denel’s security concerns was raised directly after the appointment of the new Board of Denel.

She said Fireblade was clearly not going to render the customs and immigrations services at their terminal, which would be rendered by state officials in a sterile area to which Fireblade’s employees had no access.

Denel’s about-face was “inexplicable and irrational” and could not negate Gigaba’s decision to grant approval, she added.

She said this finding tarnished Denel’s reputation, but it could not bar a court from making such a finding. The inclusion of evidence in court papers (referring to alleged involvement with “a certain family”) did not amount to reckless political posturing “unless Denel played a part in the politics in this country”.

The Judge said it was disturbing that Counsel for the respondents asked the court to strike out certain allegations while themselves reverting to name-calling and insults by amongst arguing that the “well-connected and moneyed Oppenheimers “wanted to derive private benefits at public expense”.