EFF, ANCYL call for Limpopo premier to step down 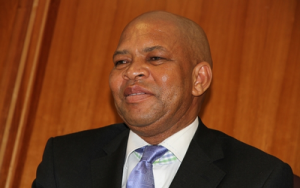 The Economic Freedom Fighters (EFF) and the ANC Youth League (ANCYL) have called for Limpopo premier Stan Mathabatha’s head over his recent contentious Cabinet reshuffle, but the DA say MEC Makoma Makhurupetje should have been fired.

This follows calls by some ANC provincial executive committee members for President Jacob Zuma to fire Mathabatha for what they see as his questionable reshuffle.

The premier moved some MECs from one department to another on Wednesday last week.

The bone of contention was not over the reshuffle itself, but the shifting of the MEC for cooperative governance human settlements and traditional affairs, Makhurupetje, from her influential portfolio to the smaller transport and community safety department.

Makhurupetje is a chief lobbyist for ANC presidential hopeful Nkosazana Dlamini-Zuma in Limpopo and her shifting to the lesser department was bound to cause a stir.

She and ANC provincial secretary Nocks Seabi are leading Dlamini-Zuma’s campaign in the province. Mathabatha aggravated the situation when he replaced Makhurupetje with his deputy, Jerry Ndou, as new MEC for cooperative governance.

A source within the Presidency told The Citizen that Mathabatha’s action prompted some Limpopo ANC PEC members to plead with Zuma to fire him.

“The members claim that Mathabatha’s decisions were influenced by political polarisation and factionalism to punish those who speak a different political language in as far as the succession debate is concerned,” said the source.

An ANC leader from the Peter Teanet branch in Bolobedu near Tzaneen, Khothongo Mopai, accused Mathabatha of punishing Makhurupetje for her preference of Dlamini-Zuma instead of Ramaphosa.

“His aim is to weaken Dlamini-Zuma’s campaign in Limpopo by removing her chief lobbyist to a smaller department that has little or no influence at all in the politics of the province. Mathabatha must just know that his little political stunt is a waste of time because already Dlamini-Zuma has numbers to win the ANC elections in December,” he said.

The DA welcomed Makhurupetje’s removal and demanded more drastic action against her. “Mathabatha should have displayed the political will to remove Makhurupetje from his Cabinet,” DA provincial leader Jacques Smalle said yesterday.

Smalle said Makhurupetje’s department was rocked by fraud and corruption allegations emanating from the purchasing of a land in Tubatse municipality in Burgersfort.

The EFF opposed the reshuffle and the party’s provincial secretary, Jossey Buthane, accused Mathabatha of abusing his position. The ANCYL said the reshuffle was only used as a tool to fight political battles.

“It will take a miracle for his questionable Cabinet reshuffle to add value to the province. He must just pack and leave the premier’s office in peace,” ANCYL provincial secretary Che Selane said yesterday. – news@citizen.co.za