Clearly, changes in response to shareholders’ concerns last year are not enough.

Shoprite Holdings, the continent’s largest retailer, has made a surprising about-turn on executive remuneration.

In a Sens announcement titled “Engagement with Shareholders” it has invited shareholders who voted against the remuneration policy and the implementation of it to “engage with the company” in a closed teleconference to be held on Tuesday.

Their participation needs to be confirmed with the company secretary by Friday and concerns and/or questions need to be provided in writing ahead of the call.

This marks a change in stance for a group that has historically paid its executives very well and almost stubbornly refused to engage on remuneration matters.

It is also the first time that a large JSE-listed company has had a formal, publicised engagement which is openly-accessible to all shareholders to deal with remuneration concerns.

In the 2016 financial year, the group was slammed for paying then-CEO Whitey Basson R100 million, including a R50 million bonus. Basson gave notice of his retirement on September 30 2016, and has received guaranteed pay until September 30 2017. In FY 2017, he was paid R50.114 million. The group notes “the previous CEO’s remuneration arrangement was governed by an employment agreement entered into with the board during 2003 (as reported in prior remuneration reports)”.

In 2011, Shoprite chairman Christo Wiese told Moneyweb “If I could find another Whitey Basson, I would happily pay him a billion. A guy with his talent is terribly rare. And the performance is there.

“He keeps a team of extremely good guys together. They make 50 million-60 million sales per month in seven jurisdictions. It is highly competitive. It takes a guy with huge intelligence, a good education, outstanding people skills – and Whitey gets his hands dirty.

“I certainly don’t have a reputation for paying more than I have to.”

In the group’s 2017 integrated report, chair of the remuneration committee JA (Nols) Louw writes that it “engaged with shareholders and took note of their comments and/or concerns” after the 29.71% voted against at the 2016 AGM.

It disclosed two concerns raised, as well as the RemCo’s response:

“The guaranteed remuneration of the previous CEO is above market and has no element of variable remuneration (linked to company financial performance).”

“The total remuneration design of the current CEO was informed by a market analysis and contains a considerable emphasis on variable remuneration linked to financial performance.”

“LTI awards will be made based on the achievement of financial performance targets set (based on trading profit) for the financial year preceding award date. Therefore, performance is tested on the “way in” and the vesting periods of awards thereafter (up to five years) provide natural alignment between management and shareholders.”

Importantly, Shoprite Holdings has changed the structure of remuneration for new CEO Pieter Engelbrecht (pictured below). “In determining the CEO remuneration design, market benchmarks of similar-sized retail companies were taken into account to set total guaranteed pay (TGP),” it says.Change to CEO pay 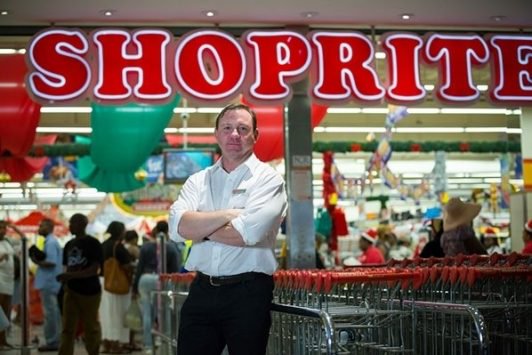 In terms of short-term incentives, Engelbrecht can earn a cash bonus of up to a third of his salary, “with an appropriate bonus cap in the event of outperformance limited to 40% of his annual” salary. Long-term incentives are comprised of an annual award of shares in terms of the company’s “virtual option bonus” incentive plan. The quantum of the award is “based on whether performance targets set for the preceding financial year were achieved”.

Engelbrecht was paid R31.255 million in the year to July 2. Of this, guaranteed pay was R9.713 million, benefits and other totalled R1.212 million, while his bonus (short-term incentive) was R4.324 million. Here, his actual percentage achieved is not disclosed by the company as he received two pro-rata amounts: one for his previous role as chief operating officer and another for his CEO role. Engelbrecht also earned long-term incentives worth R16.006 million in the year (80 000 instruments which vested).

At last year’s AGM, the Public Investment Corporation (PIC), which then held 9.46% of Shoprite Holdings, voted against four of the 21 resolutions tabled. Included in this was the non-binding vote on its remuneration policy. The PIC says in its record of voting that “the remuneration policy is inconsistent with best practice. There is no disclosure on financial and non-financial indicators; furthermore the executive directors’ remuneration is excessive”.

Last year, it told Bloomberg, “The PIC’s view is that the structure of the CEO’s remuneration is skewed toward fixed remuneration and that performance conditions for the executive-share plan lack sufficient detail. That said, we are conscious of the fact that the Shoprite CEO has not received variable pay over the last five years.”

Old Mutual Investment Group’s Equities boutique voted against both resolutions on Monday, saying that “long-term incentive programme (LITP) awards have been made which vest in less than three years (vesting in equal portions after years one, two, and three)” and that the “LITP scheme will consistently offer awards which are not performance-related”.

It also says “a one-off retention award to executive director Etienne Nel has been made, which continues a trend of similar ad hoc payments over the last few years”.

Finally, it notes that the “former CEO’s exceptionally high fixed pay continues to warrant concern, although this will no longer be an issue following the cessation of his employment agreement in September 2017”.

Between 2011 and 2015, when it held shares on behalf of clients, Coronation voted in favour of the remuneration resolutions. At last year’s AGM, Allan Gray voted against three resolutions, including the remuneration policy. In notes accompanying its voting record, it points to “CEO arrangement” as the reason.

Norway’s sovereign wealth fund (Government Pension Fund Global, managed by Norges Bank Investment Management) voted against the remuneration resolutions on Monday. As at July 2 , it was Shoprite’s tenth-largest institutional shareholder with 1.41% of the company. Interestingly, last year and in 2015 it voted in favour of the remuneration resolution. It voted against the resolution in 2014 and 2013.