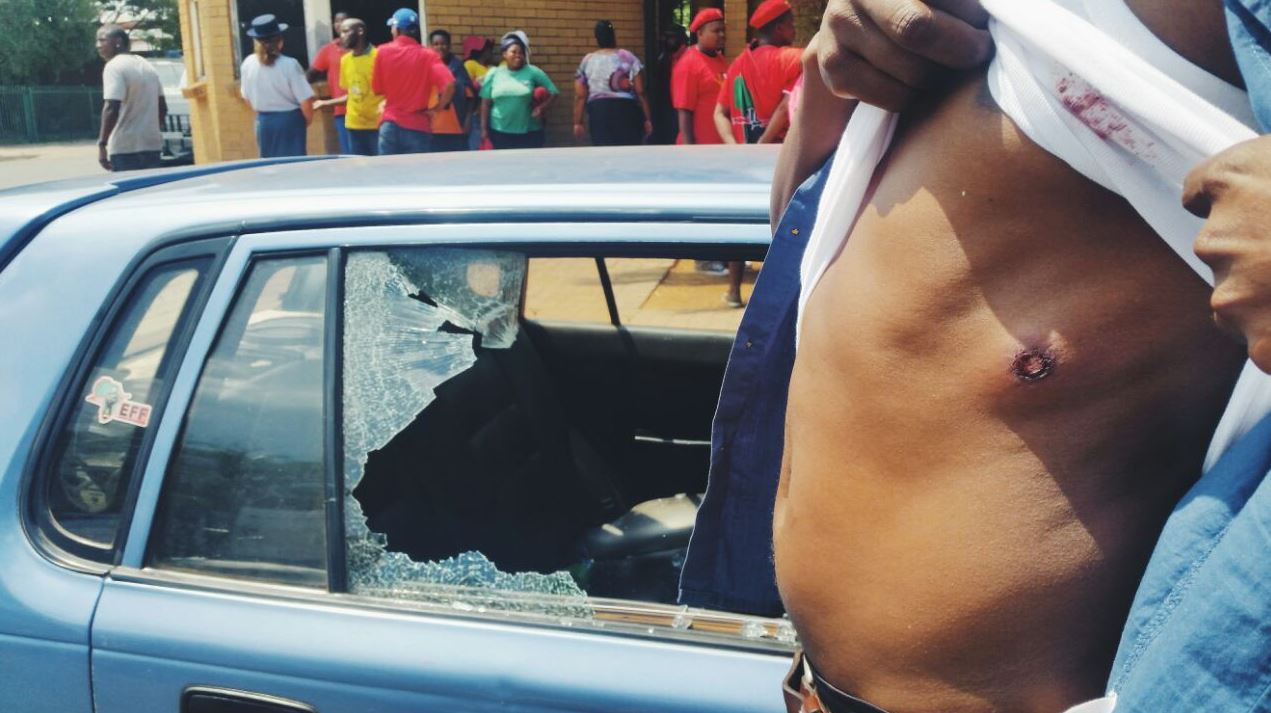 More than a hundred ANC and EFF supporters were picketing outside the court when farmers Johannes Potgieter, 33, and co-accused Hendrick Dumas, 48, appeared for assaulting and pointing a firearm at a nine-year-old black girl.

#Police spewing rubber bullets at angry mob outside #Bronkhorstspruit court. Community angry that 'racist' farmers, who tied up black girl to a tree, were out on bail. pic.twitter.com/2r6a0L354S

But the community was outraged to learn the duo, who were denied bail by the magistrate, were granted bail by the North Gauteng High Court last month when their defence appealed the ruling.

With a heavy police presence, the mob threatened to burn down the farm of the two accused, but turned their rage to the NPA staff who were walking out of the court.

A woman claims she was shot for no reason. "I was just sitting on the side of the road" #Bronkhorstspruit pic.twitter.com/0T8ZnTm3av

Police and Tshwane metro police broke out a string of rubber bullets and stun grenades, scattering the crowd who sprinted down the street.

Several women were transported to hospital after being shot by rubber bullets in #Bronkhorstspruit. @SAPoliceService pic.twitter.com/sLg5zOWYaH

But an injured ANC supporter told The Citizen she was shot at close range despite being a spectator to the protest.

“I was just sitting and watching what was happening. I don’t know why they decided to shoot at me. Police also shot at people who were sitting inside a car. They opened the doors and shot them inside.”

A motorist was however caught in the string of rubber bullets in while standing outside his car in #Bronkhorstspruit. pic.twitter.com/C6umXRUQEP

But the father of the victim, Jack Legodi, said his son and wife were shot by police at close range. "How do I explain to my kids that their mother was shot at their sister's hearing?" #Bronkhorstspruit pic.twitter.com/bp39yRRjEG

Several people were captured by police and thrown into nyalas while police drove around the area in search of more arrests.

The matter was postponed to March 13 next year for further investigations.

The young girl, now aged 10, went for a jog with her brother and two friends in September when she was captured by one of the accused who was armed.

The two accused allegedly tied the girl to a tree and pointed her with a firearm. The other three children had escaped.

Potgieter and Dumas were arrested on charges of assault and pointing a firearm, but were denied bail by the Bronkhorstspruit court.

They were however released on R3 000 bail each by the North Gauteng High Court on October 19.

Several people were arrested and thrown into nyalas while police searched for more suspects. #Bronkhorstspruit pic.twitter.com/dHJ8oFNnqH