Sitole urges cops on patrol to be ‘streetwise’

National police commissioner General Khehla Sitole said he can no longer allow cops to die with their guns in their hands while criminals run the streets. 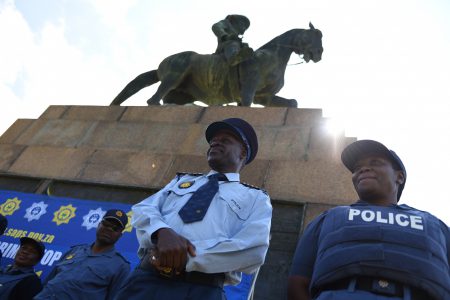 He said police must be “streetwise” to stay alive and fight crime. Sitole said he had deployed more than 10 000 members across the country with a high density policing approach and they are occupying streets, public spaces and malls to create a safe environment.

The commissioner was speaking to the media yesterday morning at the Union Buildings where he had just addressed police on their duties and responsibilities over the festive season.

“We are currently experiencing several attacks and police need to foil these attacks. We have also had a number of police officers killed by criminals while they have their guns on them. We have to make sure that all our members are operationally ready to respond to any crime or eventuality and we have trained them to do that. They must be streetwise.

He said if police officers allow members to lose their lives, they are putting the safety of the community at risk.

“If need be, if guns are used, then they must respond and affect arrests. We will use the force that is required to affect those arrests. Those who engage in corruption are not necessarily members of the service.

“They are just criminals within the service that we are in the process of monitoring and we will continuously eradicate them as well. We want the public to be served by honest, patriotic members of the service,” Sitole said.