Ramaphosa gets an enthusiastic welcome on Tshwane walkabout

Ramaphosa was visiting Pretoria to urge citizens to register to vote in next year’s general elections. 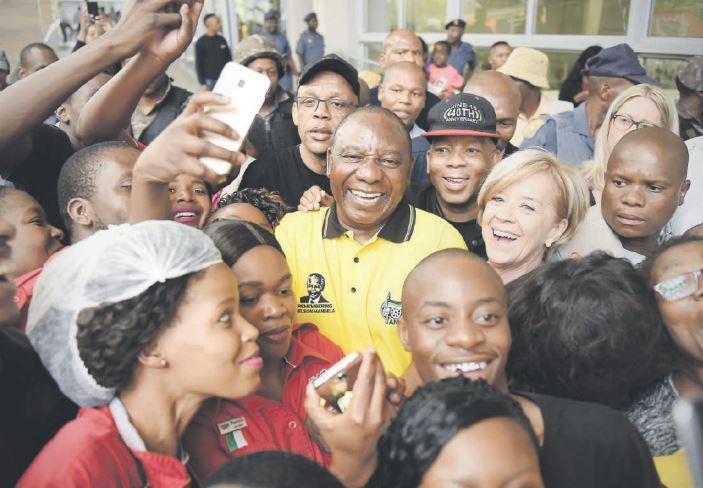 Shoppers and their children had their phones at the ready in excitement, waiting for a chance to grab a picture with President Cyril Ramaphosa, who surprised them with his visit to Forest Hill City Mall in Centurion yesterday.

Parents and their infants pushed through the crowd, with many throwing their babies in the arms of the delighted ANC leader.

Ramaphosa was visiting Pretoria to urge citizens to register to vote in next year’s general elections. He was joined by Gauteng Premier David Makhura and Tshwane ANC leader and former mayor, Kgosientso Ramokgopa.

“I’ll only take a picture with you if your camera is ready,” Ramaphosa said squeezing past his bodyguards, the media, ANC supporters and shoppers.

But prior to his warm welcome at the mall, he was met by disgruntled residents of Olievenhoutbosch, who had been picketing outside the Hope Restoration Church.  They demanded the president address the need for proper housing, roads and an increased police presence in the area.

Trying to calm the rowdy crowd, Ramaphosa assured them that Makhura would return to meet with the community on Thursday to address their issues.

“We have seen the conditions you are living in and we see you are struggling. It is not desirable. “We see you live in shacks, you don’t have water and I saw that some of you don’t even have electricity.

“We have heard clearly that many of you don’t have jobs. We noticed that you need houses and help against crime. There is no problem without a solution. There is a solution. As government, we are going to solve the problem,” he said.

Ramaphosa also attended church services at the Covenant Church in Olievenhoutbosch and Itireleng Baptist Church in Laudium, where he spoke about the importance of the church in the ANC.

Ramaphosa ended off his visit at a Centurion shisa nyama, sitting down for a hot lunch of pap, chakalaka, steak, chicken and coleslaw.

“I came across a lot of enthusiasm, a lot of energy among our people. People are full of hope and wherever I went, without me saying anything, they said ‘this is a new dawn’ and ‘we want you to send us. Thuma thina. Send us wherever you want. We are energised and want to contribute to the development and success of our country’. I guess they will be able to do so through their vote,” Ramaphosa said.

Ramaphosa faces mixed bag of pickets and cheers on Sunday