Various memorial services are being held around the country, while Mandela will be laid to rest over the weekend. 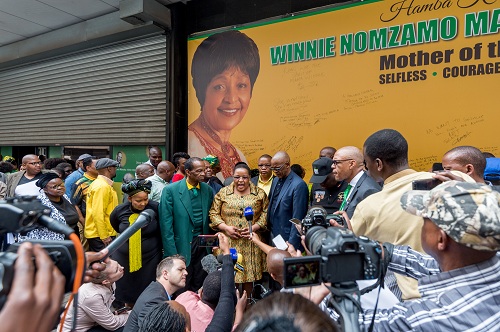 Members of the media gather during the unveilng of a mural of the late Winnie Mandela outside Luthuli House, Johannesburg on 9 April 2018. The mural forms part of many commerations taking place this week. Picture: Yeshiel Panchia

The Nelson Mandela Foundation, government officials and Graca Machel on Monday gathered at the Constitutional Court in memory of the late struggle stalwart Winnie Madikizela-Mandela.

The anti-apartheid struggle icon passed away on Easter Monday at the Netcare Milpark Hospital in Parktown.

A sizeable number of women filled the courtyard. Dressed in black the women stood out among the many people that included the late Nelson Mandela’s Rivonia treason trial lawyer Goerge Bizos as they gathered to listen to prominent speakers as they remembered the ‘Mother of the Nation’.

Meanwhile, the African National Congress also unveiled a remembrance wall outside the Luthuli House, in Johannesburg.