She also wished Public Enterprises Minister Pravin Gordhan, who shares a birthday with Zuma, a blessed year ahead. 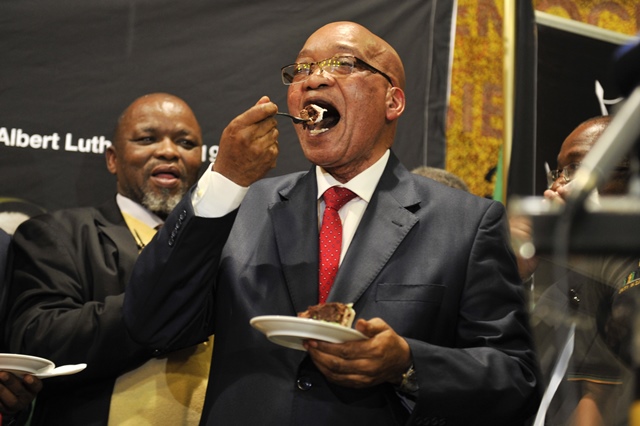 President Jacob Zuma enjoys some cake while celebrating his 76th birthday at Luthuli House on April 12, 2012 in Johannesburg. Looking on is Gwede Mantashe. Picture: Gallo Images

Former public protector Thuli Madonsela, who investigated the R246 million spent on upgrades on Jacob Zuma’s Nkandla homestead, resulting in the damning findings released in her report Secure in Comfort, has now taken the opportunity to wish the former president a happy birthday.

Madonsela caused quite a stir on social media with her tweet wishing the former president all the best for his birthday yesterday when he turned 76 … just six days after he appeared in the KwaZulu-Natal High Court on corruption charges related to the arms deal.

She also wished current Public Enterprises Minister Pravin Gordhan, who shares a birthday with Zuma, the same blessed year ahead.

During his presidential term Zuma was harshly criticised for ousting Gordhan as finance minister in his infamous midnight Cabinet reshuffle on March 30 last year, resulting in the rand plummeting.

Madonsela was also hailed for her probe into state capture, which implicated Zuma’s close allies, the notorious Gupta brothers. They are now on the run from SA law enforcement authorities.

They have been spotted in parts of India near their home town of Saharanpur, and most recently SA businessman Justin van Pletzen bumped into Ajay Gupta in Dubai on April 4 and recorded the meeting.

Zuma backers, the Black First Land First (BLF) were also among those on Twitter wishing him a happy birthday.