The 77-year-old accused, who allegedly raped a 12-year-old girl after tying her up, was denied bail for his own safety and that of the community. 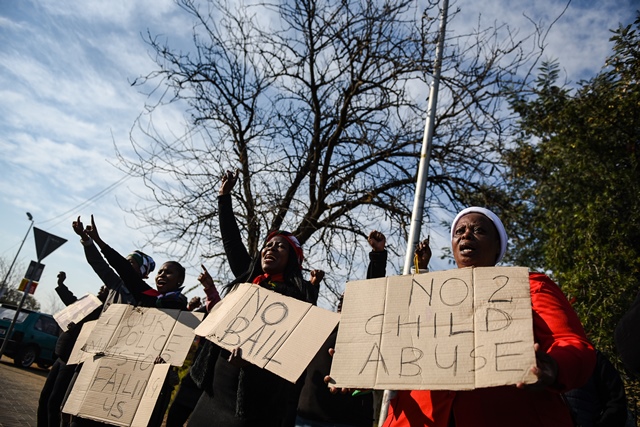 Mamelodi residents are seen outside the Mamelodi Magistrate's Court where they gathered to protest the bail application of a well-known undertaker, aged 77, who has been accused of raping his 12-year-old neighbour, 29 May 2018, Mamelodi, Pretoria. Picture: Jacques Nelles

Umkhonto weSizwe (MK) veterans rallied to protect one of their own yesterday against a possible attack from enraged Mamelodi residents.

The 77-year-old comrade is accused of raping a 12-year-old girl.

Fearing a violent standoff between the community, former MK soldiers and police, the Mamelodi Magistrate’s Court denied a bail application by the man, said to be an undertaker.

After allegedly raping the girl, he threatened to kill her, says the state.

Magistrate Bernard Swart said the safety and well-being of the complainant as well as that of the community was of grave concern. He took into account the fact that residents were protesting outside court yesterday morning, asking the police not to let them down, as well as the fact that they had already vandalised the accused’s house on the day of his arrest.

The accused allegedly forced the little girl into his bedroom, tied her hands with a rope to his headboard, undressed her and himself and then raped her.

Investigating officer Warrant Officer Michael Mhlangu testified that after the accused had his way, he told the girl to go home and not reveal to anyone what had happened because he would kill her. The girl only spilled the beans about three weeks later – on May 21 – when she told her cousin.

Mhlangu said the complainant did not have visible marks on her hands because of the long time between the alleged rape and when she reported it to police.

“A doctor also confirmed that she was not pregnant or any sign of rape [sic].”

The investigating officer asked for the court to deny the accused bail for his own safety as well as that of the community.

But the accused told the court that he was not a danger to society, that he would stay with his nephew in Waterkloof, Pretoria, and that his MK comrades will protect him.

The magistrate dismissed the accused’s application.

“It is quite clear there is a loaded situation between the community, the applicant [the accused] and former uMkhonto weSizwe soldiers, and the police in the middle.”

The girl’s aunt said they were happy he was denied bail. “She called him malome [uncle] and he used to give her fruits and sweets on a daily basis. She has no reason to falsely accuse him.”

The case was postponed to next month.