‘The risk starts with you,’ CIT security firms, cops told

ANC MP in the police portfolio committee Leonard Ramatlakane says security companies have to identify and deal with their own information leaks. 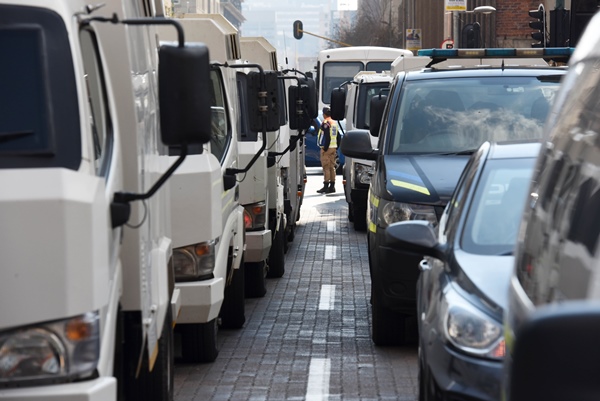 Cash in transit vehicles are parked at Beyers Naude Square in Johannesburg, 12 June 2018, during the march over armed cash-in-transit heists. Picture: Nigel Sibanda

The blame game on cash-in-transit (CIT) heists has heated up, with an ANC MP saying security companies need to get their own house in order and a crime expert saying the crimes will not go down until the police crime intelligence unit is purged of rogue elements.

ANC MP in the police portfolio committee Leonard Ramatlakane expressed his disappointment that security companies failed to acknowledge their own role in heists where internal risk and weaknesses were overlooked.

“I understand there is complete compliance … and I listened for an acknowledgement about a serious internal problem. None of that was mentioned as part of the problem. If you are in this kind of business, the risk starts with you.”

Ramatlakane said companies had to identify and deal with information leaks coming from within their workforce, suggesting that heists did not happen at random, but were carefully planned using intelligence from within the business.

Business Against Crime echoed this, saying the spike in heists was as a result of “vulnerabilities in security companies, such as the vetting of employees.”

But crime expert Gareth Newham said the quality of policing has been deteriorating over time, “because of all the political interference and multiple ministers over a short space of time, and a number of appointments of incompetent people in key positions.

“That is why we saw cash-in-transit heists go up to almost 400 in 2013-2014. The real question that should be asked is what is being done to fix crime intelligence.”

The portfolio committee yesterday held a public hearing on the recent spike in cash heists.

But Newham said plans announced by SAPS yesterday related to random searches and visible policing were proven in the ’50s to be insufficient in policing organised crime. Identifying the patterns involved in the cash-in-transit network was also a key factor in policing the trend.

“The only real way to bring these crimes down is to identify the individual networks involved and to ensure those individuals are arrested and put in jail.

“If you increase security on the vehicles, they will just go for ATMs or jewellery that’s being transported – or start going after the trucks. These criminals don’t just do one kind of crime,” Newham said.

Newham pointed out that between 2009 and 2011, the SAPS’ Gauteng aggravated robbery strategy reduced home invasions by 20%, business robberies by 19% and hijackings by 32% using a force of only about 400 police officers.

But this all had to start with cleaning out crime intelligence, said Newham. “We have a number of these crime intelligence officers who have been involved in organised crime, such as Captain ‘KGB’ Tshabalala who has been linked to at least 8 heists.

“[Former crime intelligence boss] Richard Mdluli allegedly made about 250 dodgy and irregular appointments in his time, many of whom were his friends and family,” Newham said. “Until criminal elements within crime intelligence are investigated, suspended and prosecuted, the efforts of this unit would always be undermined by corruption.”

“Areas we are going to focus on is the cash in transit plan. We have got a five-pillar approach which is being developed, intelligence gathering, analysis and coordination … the proactive, preventative approach, the combating rapid reaction approach and lastly the communication.”