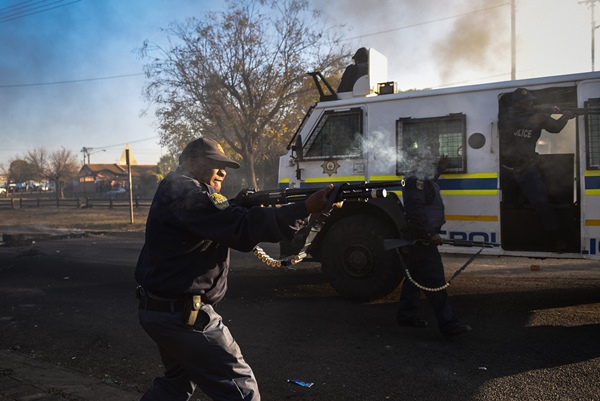 Innocent bystanders who were caught in the crossfire and wounded when police fired rubber bullets in Eersterust this week are encouraged to open a case with the Independent Police Investigative Directorate (Ipid), Tshwane mayor Solly Msimanga said yesterday.

Scores of innocent people suffered serious injuries, including skull fractures, when more than 20 public prder police officers opened fire during a protest in Eersterust on Wednesday.

Citizen photographer Jacques Nelles had a rubber bullet wound in his back while senior reporter Virginia Keppler broke her leg and ankle while running for cover. Pretoria News reporter Sakhile Ndlazi was also hit on the back of his head by a rubber bullet.

Victoria Daniels was taken to Tshwane District Hospital where she was referred to a plastic surgeon for possible reconstructive surgery after she was hit in the face by a rubber bullet.

A 61-year-old man, Arthur Moses, died in his home, allegedly after inhaling tear gas when a cannister was thrown into his yard. According to his brother, Dawid Bera, Moses was not taking part in the protest.

Bera was distraught and said: “He started complaining about chest pains and then he collapsed and died at home, but we are not sure yet of the exact cause of death. The police use rubber bullets and instead of warning by shooting in the air, they shoot at us. How can we defend ourselves?”

But Msimanga and the Tshwane metro police are willing to assist those who were wounded by police.

According to residents, the police were not provoked and opened fire without warning.

Msimanga said yesterday: “I would like to put it on record, we encourage those that have been injured to open a case with Ipid and to see whether there is anything police have done that has been an overreach and we will take it from there.”

“We are aware of the two that were shot in the face. We are not necessarily saying we are wrong, but any incident where police are suspected to be involved, we want Ipid to investigate and we are willing to cooperate with them. We are willing to help those that want to open cases with Ipid,” Mahamba said.