An explosive affidavit by an embattled accountant alleges that staff at a Gupta-linked company already have a plan to avoid accounting to Terrence Nombembe. 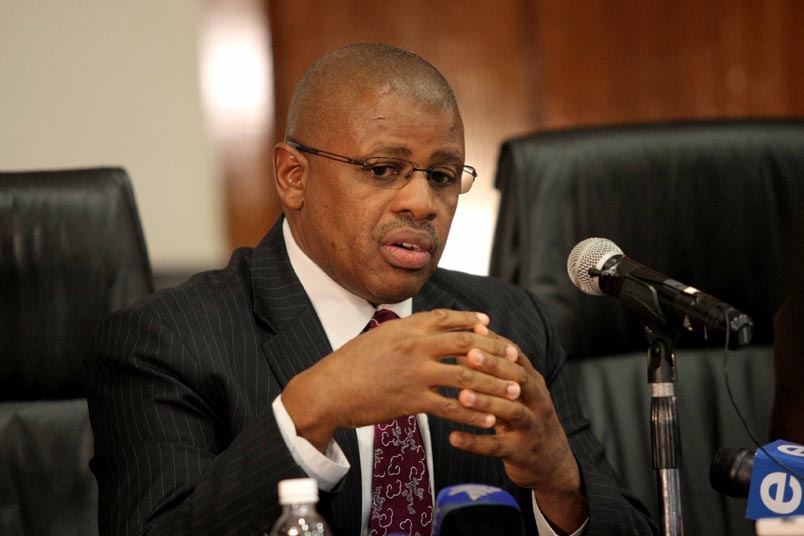 Former auditor-general Terence Nombembe during a media briefing on march 12, 2013 in Pretoria. He has been named by Khaya Sithole in an explosive affidavit. Picture: Gallo Images

An explosive affidavit by academic, columnist and chartered accountant Khaya Sithole not only questions the integrity of the accounting and audit profession in South Africa at the highest level, it creates serious doubt about the ability of the upcoming state capture commission of inquiry to do its work.

Among other things, Sithole has accused the board of the SA Institute of Chartered Accountants (Saica) of lying and covering up corruption. He also makes the observation that the state capture commission, which is likely to cost upwards of R230 million, may already be tainted and discredited before getting out of the starting blocks.

Sithole, who has called for the entire Saica board to be replaced, has quietly sent shockwaves through the accounting industry, which is still reeling from – among many other finance dramas – the recent KPMG-Gupta scandal and the Steinhoff meltdown.

In what he describes as an obvious attempt by the Saica board to silence and discredit him, Saica has accused Sithole of irregularly adding 129 students to the Thuthuka Bursary Fund (TBF), Saica’s scholarship scheme between 2014 and 2016. Sithole was its programme manager at Wits University in addition to his academic work. Saica has complained this “fraud” ultimately cost it more than R10 million – though Sithole (while admitting he was complicit in numerous irregularities at the TBF) says this is nonsense and he personally helped to get funding of about R9 million for the TBF through his own networks.

The Saica chairperson, also Deloitte Africa’s CEO, Lwazi Bam, said in a statement last week that the Saica board “distances itself from all [Sithole’s] allegations and wishes to reiterate its support for its whole leadership team”.

Sithole, however, blames Bam for wanting to remove him as a CA (SA) before Saica’s AGM (which was scheduled for yesterday) after he wrote an open letter calling for the removal of the board – allegedly to ensure that Sithole would not be able to get on to the board himself.

Sithole’s affidavit deals at length with the circumstances and challenges he faced when managing Saica’s bursary fund. He links the action against him, in part, to information he related to the then Saica CEO and TBF trustee Terrence Nombembe about a R1.2 million donation Nombembe accepted in March 2017 for the TBF from the Gupta-linked company Trillian Capital.

Nombembe, alleges Sithole, believes Sithole “leaked” information about the Trillian donation to EFF leader Julius Malema, who called for Nombembe to be removed from the state capture commission of inquiry after Nombembe was named as chief investigator.

Aside from Nomvembe, Sithole has named numerous others as interfering to add students to the bursary scheme without following due process.

Sithole’s disciplinary hearing at Saica’s offices in Illovo, Johannesburg, started on Friday and saw TBF’s project director, Nthato Selebi, alleging Sithole gave students a confirmation letter using a document with Selebi’s “forged” signature. Sithole says in his affidavit that Selebi had always been aware of the letter and how it was used, and had never raised alarm about his digital signature during the three years it was used.

A date for the continuation of the hearing is yet to be announced so that Sithole can give his side. His lawyer is well-known advocate Tembeka Ngcukaitobi.

What may prove to be the most interesting element in the Sithole saga, and which has implications far beyond the accounting profession, is Sithole’s observation about how Nombembe’s actions and public statements may have created a loophole to allow witnesses to get out of participating in the state capture inquiry.

“Firstly, once I had forced Saica to come out in public about their Gupta association, Nombembe proceeded to use a most unfortunate series of words when he stated that the [donated R1.2 million] had been paid back because Saica discovered that Trillian was a tainted entity. Those words simply mean that Nombembe is of the opinion that Trillian is corrupt or fraudulent and has gone as far as to say this in public,” wrote Sithole.

“On that basis alone, Nombembe’s statements amount to an implicit bias against Trillian as he has already made public pronouncements relating to the company that leave him unable to be seen as an objective investigator.”

Sithole adds that he is personally aware of a “few individuals” who worked at Trillian who will use this to refuse to appear before the chief investigator [Nombembe], as he cannot be considered an “objective investigator”.

“The retention of Nombembe creates a massive loophole where witnesses will simply fail to appear before the commission.”

Government ‘does not provide enough protection’ to whistleblowers
2 weeks ago
2 weeks ago
PREMIUM!

Government ‘does not provide enough protection’ to whistleblowers
2 weeks ago
2 weeks ago
PREMIUM!