Zuma has new legal ‘dream team’, but no one is saying who’s paying – report

There is more than a smidgeon of justification to assume the Gupta family may be lending a helping hand again. 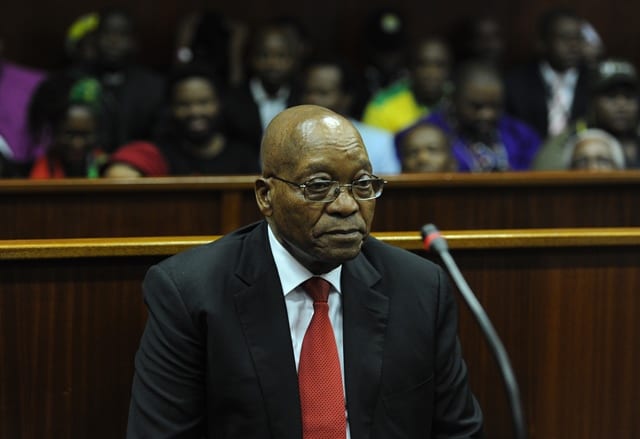 According to a report in the Sunday Times, recent concerns about former president Jacob Zuma’s ability to hire top legal minds to represent him may have been misplaced.

It had earlier been reported he had fired his advocates over payment worries, while his longtime lawyer Michael Hulley was also given his marching orders late last month.

However, it appears Zuma will be well defended when he again appears in the high court again on Friday.

Two of his new lawyers are currently representing the Gupta family as well as Zuma’s son Duduzane, but the legal team would not divulge to the paper who was paying them for representing the former president.

The Guptas are known to always have supported Zuma with his legal cases, coming to his aid years before he eventually became president. They may be continuing that tradition now.

The paper reports that Zuma will enjoy the services of four senior advocates and one junior counsel on Friday. The rates for such professionals could run as high as nearly R300 000 a day, though it could be lower, at R160 000.

Zuma will go on full trial in November, with costs likely to balloon to several million rand.

According to the presidency, Zuma can count on government to fund the costs of just one senior counsel and two juniors.

Senior counsel Mike Hellens and senior counsel Dawie Joubert have acted and continue to act for Duduzane and the Guptas and are now part of Zuma’s team.

Zuma faces a legal challenge from both the EFF and the DA who want the state’s agreement to fund Zuma’s legal costs, which was agreed with then president Thabo Mbeki after Zuma was charged with corruption in 2005, to be set aside. Zuma reportedly missed a June 16 deadline to respond to both cases.

In the Gupta emails it was allegedly revealed last year that Mantsha had been “hand-picked” by the Gupta family and “cultivated” into the man who helped them attempt to capture influence and contracts at state-owned arms manufacturing company Denel.

He was struck off the roll of attorneys in 2007 after a “litany” of complaints from clients. The court judgment reportedly found the public needed to be “protected” from him.

He was readmitted in 2011 and served as a special adviser to then minister of communications Faith Muthambi in 2015 while the public broadcaster was under the guidance of then chief operating officer Hlaudi Motsoeneng.

He became the chair of Denel that same year. The Gupta emails allegedly reveal he promptly set about sharing Denel’s confidential information with Gupta associate Ashu Chawla and met with the family in India and Dubai on “five-star trips”.

Mantsha was removed as Denel chairperson in March after Pravin Gordhan was named as the new public enterprises minister. Mantsha went back to being a practising attorney in law firm Mantsha Attorneys.

In May, Hulley suggested the “uncertainty” around who would be paying Zuma’s legal fees in his corruption trial was making it difficult for Zuma to retain the services of his advocates, who were already fired that month.

Zuma was initially charged with corruption, money laundering and racketeering in 2005 before charges were dropped in 2009. They have since been reinstated.

To date his legal fees have cost the country at least R15.3 million, President Cyril Ramaphosa has revealed.