Silent Tom Moyane has his say

Inquiry hears complaints that the process is procedurally unfair, and of Moyane’s adversarial relationship with Pravin Gordhan. 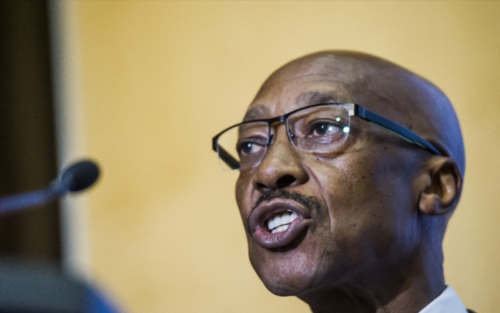 Clad in a bright, burgundy suit, suspended South African Revenue Services (Sars) commissioner Tom Moyane sat silently and ran his fingers through his stubble as the disciplinary inquiry against him commenced on Saturday.

Moyane, who is facing serious allegations of misconduct during his tenure at Sars that could result in  possible criminal sanction, has used silence as his weapon of choice as he has attempted to drum up public support and cut a figure of innocence.

Moyane has chosen his legal counsel, led by advocates Dali Mpofu and Eric Mabuza, to speak on his behalf as he attempts to refute allegations that he’s a key a figure behind the deep destruction of Sars.

But anyone who thought the inquiry, which is being chaired by advocate Azhar Bham in Johannesburg, would get to the substantive issues quickly may have been disappointed. Moyane believes he is being unfairly treated by President Cyril Ramaphosa and his legal team kicked off proceedings by taking issue with the structure of the inquiry.

Moyane has objected to the fact that the disciplinary inquiry doesn’t allow for oral submissions and cross examinations. Instead it is structured to only allow for written submissions in the form of affidavits by witnesses. Mpofu argued on Saturday that the Sars code of conduct – which applied to Moyane – makes provisions for oral evidence and an opportunity to cross-examine witnesses.

“We are guided by the Labour Relations Act and the Sars codes of conduct in this hearing,” Mpofu said, adding that an inquiry of this nature is conducted through oral submissions as was done in the inquiries of former National Police Commissioner Riah Phiyega and former National Prosecuting Authority boss Mxolisi Nxasana.

“They were all given a fair chance‚ but why not Moyane?”

Moyane’s legal team want Ramaphosa to scrap the disciplinary inquiry’s terms of reference to allow oral submissions by witnesses – including those chosen by Moyane. According to the inquiry’s terms of reference, which are set by Ramaphosa, oral evidence would only be heard at the panel chairman’s discretion – meaning that the power rests with Bham.

“The terms of reference are irrational. They say the process must be fair, based on the disciplinary procedure which provides for cross-examination,” said Mpofu.

“Having established that a fair process by constitutional law and agreement by the parties necessarily includes oral hearing, the terms of reference take these rights away.”

Advocate Heidi Barnes, who is part of Ramaphosa’s legal team, said Bham does not have the power to determine the terms of reference but has the “duty to run the inquiry in a manner that is fair and just”.

“It [Moyane’s objections] assumes that the chair [Bham] will not run a fair process. There is no basis for this assumption, which is entirely premature. The chair has not yet made a decision as to what extent the oral submissions will be included,” she said.

Barnes argued that the Sars codes apply to all employees of Sars, but that Ramaphosa can follow a different code of conduct for executive management that will be fair. The power to discipline Moyane is an executive power that Ramaphosa has under section 6 of the constitution and the Sars Act. “Moyane is not entitled to much under the law. The only thing he is entitled to is a decision that is lawful and rational,” she said.

Moyane was suspended in March by Ramaphosa and faces charges of misconduct over his leadership at Sars. Under Moyane, the tax agency has suffered a deterioration in public confidence and public finances have been compromised.

Moyane has objected to the former finance minister and Sars commissioner Pravin Gordhan submitting an affidavit as a witness in the disciplinary inquiry, saying he doesn’t have authority to do so.

Mpofu said Gordhan has usurped powers not entitled to him by law and recommended that current finance minister Nhlanhla Nene should provide the evidence instead of Gordhan.

In his affidavit, Gordhan said he has personal knowledge of the matter up until March 30, 2017.

Mpofu has taken umbrage with this. “That is exactly a full year between the time he stopped having personal knowledge and the time Ramaphosa told Moyane that he’s suspending him.”

Moyane wants Gordhan to be cross-exanimated to explain why he deposed the affidavit and not Nene, and prove that he’s a “biased individual”.

“There is hostility between Gordhan and Moyane. Gordhan is trying to rule from the grave as the former commissioner of Sars. Gordhan has gone to give evidence at the Nugent inquiry, which disparages Moyane’s rein at Sars,” said Mpofu. The Nugent inquiry is a separate process that is mandated to probe the governance of Sars, which is chaired by retired judge Robert Nugent.

Moyane wants Ramaphosa to either stop his disciplinary inquiry or the Nugent inquiry as the two processes run concurrently.

Ramaphosa is not willing to stop the Nugent inquiry, as his legal team said the inquiry was not about Moyane’s rein at Sars. “The fact that they are in existence at the same time and the fact that Moyane has a role to play in both processes does not give rise to any unfairness,” said Barnes.

“The commission of inquiry is inquisitorial, tasked with fact-finding only, and the disciplinary process is adversarial, charged with making findings of guilt or innocence,” she said.

Through his legal team, Ramaphosa said Moyane was “sabotaging” the speedy conclusion of his disciplinary inquiry. “Moyane seeks to turn sound disciplinary procedure on its head by refusing to answer to the substance of the allegations against him until his technical points have been determined.”

The decision to allow or bar oral evidence by Bham is expected in the week of July 30.

Production company, Red Pepper Pictures, in trouble with Sars
2 days ago
2 days ago

Production company, Red Pepper Pictures, in trouble with Sars
2 days ago
2 days ago