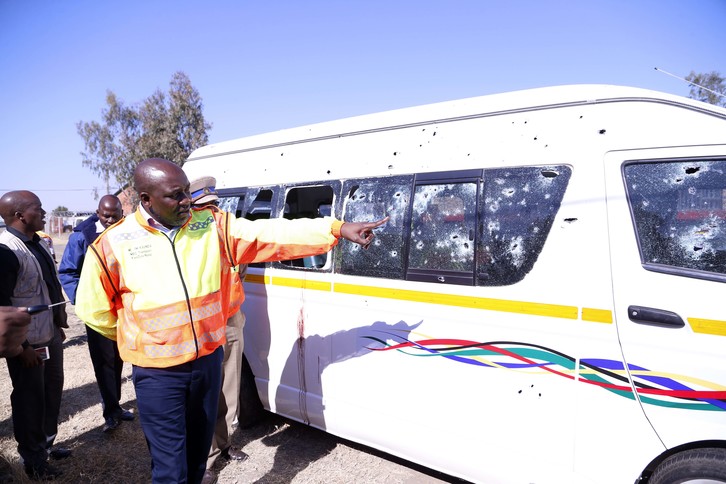 The death toll in the shooting incident that claimed 11 people’s lives on Saturday night on the R74 has risen to 12, Ladysmith Gazette reports.

The person who was in a critical condition sadly passed away on Tuesday morning in hospital (whose name has been withheld for safety reasons), said the hospital’s public relations officer.

READ MORE: Deadly KZN ambush may have been a mistake – taxi association

Three survivors are in a stable condition under heavy police guard.

Eleven people were declared dead at the scene. One critically injured occupant and three with moderate injuries were rushed to hospital by paramedics.

Two other men managed to escape the hail of bullets, and were treated for shock by paramedics on scene.

A Toyota Quantum that was travelling along the Colenso and Weenen roads was ambushed by unknown gunmen.

The 17 occupants (taxi drivers), associated with the Ivory Park and Kempton Park taxi associations in Gauteng, were returning from the funeral of a Gauteng taxi operator near Greytown when they were attacked.

The unknown gunmen used high-powered rifles, firing over 200 shots into the Toyota Quantum.

National commissioner of the South African Police Service (SAPS) General Khehla Sitole activated a 72-hour action plan on Sunday, consisting of officers from specialised units within the SAPS, including Crime Intelligence, Directorate for Priority Crimes Investigation (Hawks), detectives and the Special Task Force, to trace and apprehend those responsible for these killings.

MEC for Transport, Community Safety and Liaison Mxolisi Kaunda distanced the incident from the ongoing taxi conflicts in Ladysmith, which have resulted in the suspension of some operations of the Sizwe and Klipriver taxi associations.