Political parties ‘too silent’ on recent xenophobia in Soweto

It could all boil down to election politics, but the way political parties reacted to this week’s events in Soweto 'was xenophobic in itself'. 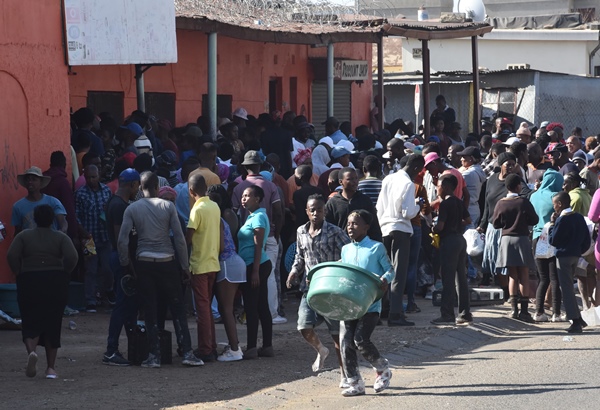 Community members loot foreigner-owned shops at White City in Soweto after an owner of a spaza shop was accused of killing a local teen, 29 August 2019. Picture: Nigel Sibanda

Experts have slammed South Africa’s major political parties for failing to call out the apparent xenophobia behind violent protests in Soweto this week.

Three people were killed and several injured during a series of looting and ransacking rampages by angry protesters in parts of the township.

The ANC and the Economic Freedom Fighters (EFF) responded by expressing concern over the accusations made by protesters that foreigner-owned spaza shops were selling expired and substandard goods.

The Democratic Alliance (DA) released a statement calling for calm on Wednesday following the violence, before issuing another one blaming the police department for failing to deal with xenophobia.

But Makhosi Khoza, head of lobby group Outa’s local government programme, said she was disappointed that all three parties had failed to adequately address the xenophobia which, she said, was behind the attacks on immigrants and their businesses.

Political analyst Daniel Silke said next year’s elections may have caused parties to tread lightly on issues which may alienate South African voters.

“I think we are probably seeing all the major political parties have not wanted to question South Africans participating in the violence … including the DA who, historically, would have been the most vocal on anything related to xenophobia,” he said.

“The coming elections probably motivates the political parties towards supporting the South African residents of Soweto who are taking part in these protests. They don’t want to be seen to be supportive of the foreign nationals.

“I would argue that there is a need for a more balanced approach to see where wrongs have been committed.

“To tacitly remain quiet on issues that definitely have a xenophobic tinge to them, one would argue that is an embarrassment and a cause for great concern to ignore the underlying and associated issues attached to this kind of protest.”

Khoza argued that the way political parties reacted to this week’s events was xenophobic in itself.

The fact that emphasis was put on questioning the quality of products sold by foreigner-owned spaza shops, only after local residents displayed xenophobic tendencies, moved to legitimise hatred for African immigrants.

“We cannot have politicians coming out with messages that are perpetuating xenophobia because they are inadvertently exposing their own political bankruptcy,” said Khoza.

“They have no understanding of the bigger picture about where we are going as a continent. In fact, they are guilty of xenophobia themselves. These leaders are perpetuating xenophobia. We need to strengthen relations with other countries on the continent.”

Silke said although the issues which sparked the protests may have legitimacy, the manner in which they were dealt with exposed inadequacies of government.

“There is no excuse for violence. However, the issue is an administrative one in terms of maintaining control of the testing of standards of these products. We have seen our borders becoming more porous in terms of the foodstuffs that enter our country,” he said.