A heavily armed task force has been involved since Tuesday in a massive crackdown that has seen the arrest of notorious alleged poachers. 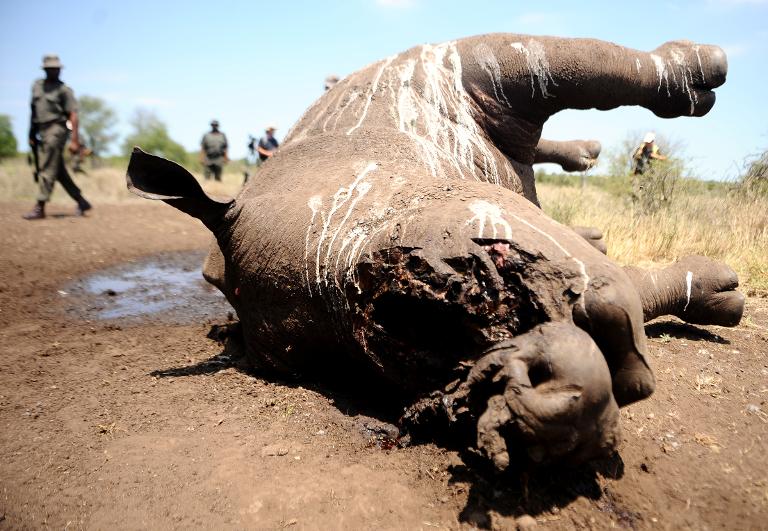 FILE PICTURE: Kruger National Park staff walk near the carcass of a rhinoceros killed by poachers at Houtboschrand in the southern part of Kruger National Park, northeastern South Africa, on November 27, 2013.
Another suspect who is believed to be high up in the syndicate ranks, Clyde Mnisi (33), was also arrested. Two active police officers, and one who was fired from the force earlier this year, were arrested the same day for allegedly assisting the members. The active members were Capt Phineas Lubisi (SAPS Calcutta) and Const Aretha Mhlanga (SAPS Skukuza), while former constable Claude Lubisi was also arrested. According to police spokesman Col Mtsholi Bhembe, the latter was dismissed early in the year through an internal disciplinary process after he was arrested for similar allegations.

His father Capt Phineas Lubisi, was commander at Calcutta Police Station at the time of his arrest. Another officer, Const Rachel Qwebana, was arrested on Thursday after going “on the run”. She handed herself over to Hazyview police and was to appear in court yesterday. Nyalunga is a former warrant officer of White River Police Station. The arrests were made after what is believed to be the biggest operation of its kind in South Africa and followed an investigation by the Wildlife Trafficking Section of the Hawks that started in January 2017, named Project Broadbill.

According to the Hawks spokesman Capt Dineo Sekgotodi, the arrests were made with the support Counter Intelligence, Special Task Force, SAPS Forensic Science Service, SANParks, the Department of Environmental Affairs, SARS and Customs and the National Prosecuting Authority. The mass task team, numbering 123 members, was deployed from a location outside White River, from where the operation was launched at daybreak on Tuesday morning. A strong team of 64 members of the police’s crack Special Task Force was brought in from Gauteng to bolster the operation’s iron fist against the alleged mob bosses.

During the operation properties of the kingpins were searched and law-enforcement members found and confiscated luxury items, cars and an undisclosed amount of money, estimated at millions of rand. The operation focused on the criminal supply chain of poached rhinos within the Kruger National Park, KwaZulu-Natal, Gauteng and other private or state-owned reserves.

The operation is expected to continue in KZN and Limpopo. The provincial police com

Trucks at the ready at Big Joe’s house.

missioner, Lt Gen Mondli Zuma has on numerous occasions warned members and employees not to engage in corruption and other criminal activities.”Hence these arrests are most likely to uproot rotten elements from the ranks of the police as well as serve as a deterrent to other members and employees,” Zuma said.

The six suspects appeared in the White River Magistrate’s Court on Wednesday on charges of poaching, theft and possession of stolen property relating to the poached horns of seven white rhinos. A source close to the undercover operation told Lowvelder yesterday that they were concerned that the courts in the Lowveld may not be in a position to handle such a wide ranging hearing on organised crime, in terms of the POCA Act. According to Sekgotodi, during the investigation it was also found that Nyalunga is in debt with SARS. “We found that he owed R21 million and we are now confiscating all property and items that are suspected to have been accumulated by defeating the end of justice,” Sekgotodi said. The Hawks, along with customs officials and members of the police and SARS emptied the properties belonging to Nyalunga yesterday.

The six were remanded in custody. They are to reappear in the White River court on Thursday September 27.