This could also be an opportunity for him to get rid of his opponents in the ANC who are almost all implicated in state capture, an analyst says. 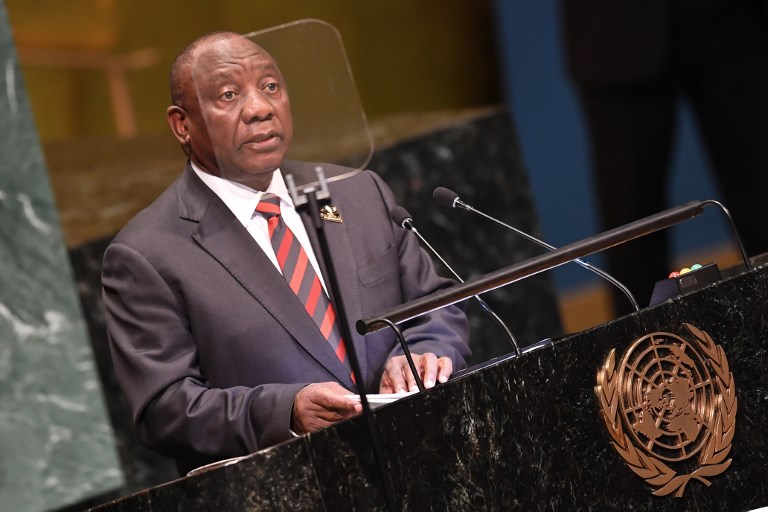 President Cyril Ramaphosa addresses the Nelson Mandela Peace Summit on September 24, 2018, a day before the start of the General Debate of the 73rd session of the General Assembly at the United Nations in New York. Picture: AFP Photo

President Cyril Ramaphosa is pinning his hopes of attracting foreign investors and kick-starting economic growth on his clean-up of state and private sector corruption, and making sure those responsible for graft are held accountable and even go to jail.

Ramaphosa said South Africa’s criminal justice system was going to be busy in the coming months, which implies the country could see visible action by law enforcement agencies against those involved in public and private sector corruption.

He revealed this while addressing a question-and-answer session at the United Nations’ Council for Foreign Relations in New York.

He said the clean-up of state institutions was part of a major project his government trusted would reposition the country’s economy in such a way that it would be attractive to investors. He said the process was something that he was personally “firmly focused” on as president.

Those who are complicit should be accountable and those who are found to have done wrong should be able to face the might of the law,” Ramaphosa said.

He stressed that corruption in the country was not only the preserve of government and state entities – corporates were also deeply involved in graft.

Government had found a lot of corruption in the corporate world that had led to the loss of billions of rands through pension funds and other areas.

“Our clean-up act is aimed at both the private and public sectors. In the next few months, I am sure that our criminal justice system is going to be busy dealing with those matters,” Ramaphosa said.

The Investment Conference to be held in October in South Africa would raise about $1 billion (about R14.4 billion) over a period of five years.

“It will be a South Africa that is performing, that is repositioning itself to be attractive, not only to foreign investors but also to domestic investors,” he said.

The president explained that domestic investors had either stopped investing in the country’s economy or they became timid and slowed down in their investment activities. He said he was determined to reverse that.

Ramaphosa undertook to ensure that the country’s economy grew because he realised it was not growing at the level expected and the situation was exacerbated by the technical recession the country was experiencing.

Last week, he announced a stimulus package to inject money into the economy.

“We had to step in as the government to give impetus to grow the economy by pumping in money,” he said.

Ramaphosa added that South Africa had a high debt to service ratio and its borrowing capacity was limited.

The government hoped that both the manufacturing and export sectors would grow, said the president.

Political analyst Andre Duvenhage believes Cyril Ramaphosa was serious about his statement to act against those involved in graft, and that he would act to deal with those implicated in state capture and his opponents in the former “premier league”.

“Many of Ramaphosa’s enemies are within the ANC,” Duvenhage said. “All the premier league members are implicated in state capture, except David Mabuza.

“Ramaphosa is preparing the world that he is going to act against those implicated in corruption.”

He said the president had to sell himself to the outside world as a legitimate leader and at the same time he might want to get rid of his opponents within the ANC.

“Let’s give him some credit for showing the political will to act against corruption,” he said.

“But the important point is that South Africa needs America, economically.”