Talk that farmers would stop planting because of land reform is far from the truth, says an agricultural economist, as tractor sales spike and crop planting peaks. If commercial farmers are worried about the impending expropriation of land without compensation, that clearly hasn’t stopped them from continuing with their business as usual, say experts.

Agricultural economist Wandile Sihlobo said talk over the past few months that farmers would stop planting because of uncertainty over land reform was contradicted by data, which “suggest that this is hardly the case”.

“Just this week, the SA Agricultural Machinery Association indicated that tractor sales were up 11% year-on-year in September, with 612 units sold.

In his blog, Agricultural Economic Today, Sihlobo added: “To further refute the claims – that farmers stopped planting – between May and August this year SA farmers planted 508 350ha [hectares] of winter wheat, up 3% year-on-year, and 119 000ha of barley, up 30% year-on-year. There is also fairly good activity in other field crops, horticulture and the livestock sector.”

He added: “With numbers like those, it is clearly inaccurate to state that ‘farmers have stopped planting’.” 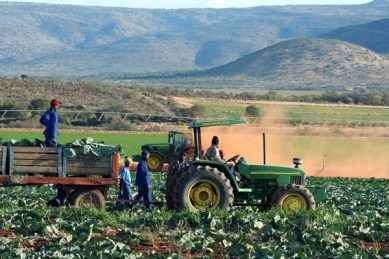 A farmer and his workers busy harvesting cabbage.

The conservative-inclined Transvaal Agricultural Union SA (TAU-SA) has urged crop farmers to plant as much as they can this season, despite the increasing uncertainty brought on by the land expropriation debate.

TAU-SA general manager Bennie van Zyl said while it was too early to tell whether some farmers would be planting less crops, if at all this year, it was not advisable to make a decision purely based on the prospect of government adopting a policy to expropriate land without compensation.

“It is a very complicated thing to measure and at the moment it is too early to tell, because we have to wait for the first rains to come,” said Van Zyl about the possibility of less crop planting this season.

“Only then we can see how much planting activity is happening so we should know for sure in a couple of weeks’ time. But I think every farmer decides on their own according to their situation, and there are many factors that make it difficult.” 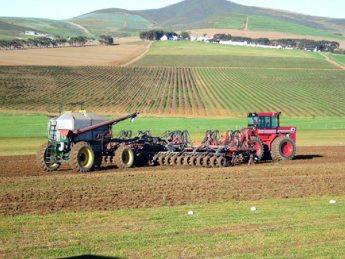 Agriculture fell almost 30% in this year’s second quarter, which was blamed for the country entering into a technical recessio,n with the gross domestic product falling to 0.7%. The decrease was mainly because of a drop in the production of field crops and horticultural products.

Organised farming group AgriSA’s president Dan Kriek said the decline in growth figures in the first two quarters of the year had more to do with economics than politics.

“We saw a very high increase in economic growth after the drought and particularly the maize harvest,” he said.

Van Zyl said his union was, however, concerned with the growing uncertainty in the farming sector and said the effect of this might not be felt immediately.

Despite this, he said, he remained optimistic about the immediate future.

“Every farmer is different, although it does have an impact in some ways, but we will have to wait for the process to unfold.”

He gave an example of the Free State, where “some farmers are still being affected by the drought and can’t plant and they can’t get the finances, but some are taking a chance”.

However, he noted “the land issue is one of the problems that might make a farmer say he is not willing to take the risk, so it is becoming a problem”.

“We would tell them to have their farms as fully operational as they can. If you can do it, go for it and do the best that you can do.”