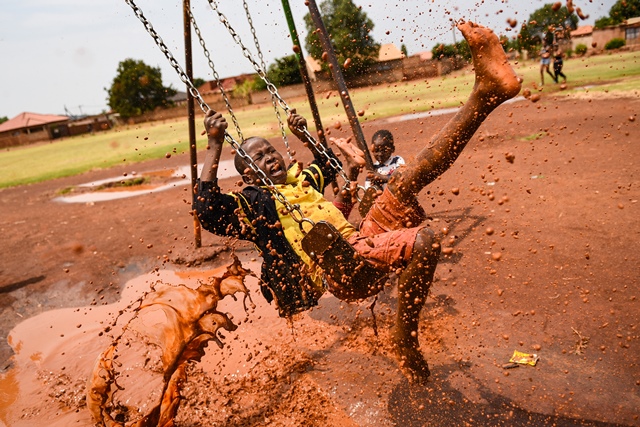 Children play on a swing above a puddle of water after the previous night's rain in a park in Soshanguve, 26 September 2017, Pretoria. Picture: Jacques Nelles

Residents might blame the City of Tshwane for not removing the light mast that fell and killed five Soshanguve children last year, but the delay came from the department of labour and police, since they still have not finalised a report on the deaths.

Last year, tragedy struck residents of Soshanguve Block X, where a light mast fell on five young girls as they were playing outside on a Saturday afternoon.

The steel ring holding the light broke and fell on them, killing four instantly. Baloyi died later in hospital, while a sixth child, Ofentse Khoza, 11, survived.

Last Sunday marked a year since the tragedy and residents held a prayer session at the site in remembrance of the children. The scene hasn’t changed in the year. The debris has not been removed and pictures of the children and candles are a constant reminder.

Pule Mmenu, father of one of the dead girls, said he had found closure but like his neighbours, wanted the light to be removed. Ward 25 councillor Phumzile Hlatswayo said a commemoration service would be held at the scene on Saturday.

“Even in council, we have been raising these issues and there is a petition from the community to remove the light. That light … torments them on a daily basis.”

The light cannot be touched until police and the department of labour complete a report detailing how the accident occurred. Tshwane member of the mayoral committee of utility services Darryl Moss said the incident was recorded as an industrial accident, requiring investigations into the “cause and blame”.

“But we are in a catch-22 situation. We are sitting in the exact same position [as the community]. The department of labour and police haven’t given us their report. “We want to remove it … but we are not allowed to do anything because we will be tampering with the scene. It is frustrating and our hands are tied.”