The members involved have said they're willing to take a polygraph to prove their innocence. 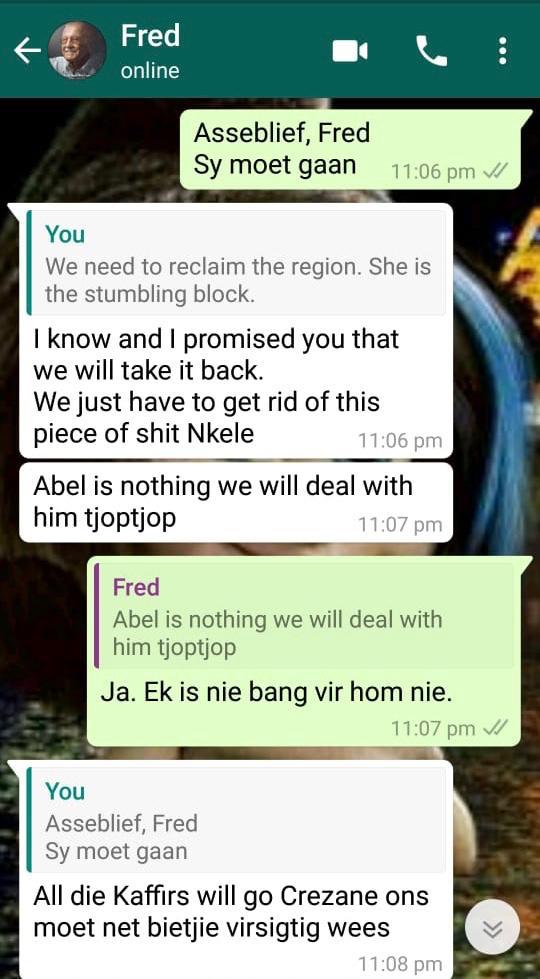 The Democratic Alliance have firmly denied referring to a black member using the k-word following a screenshot of a WhatsApp conversation in which DA Gauteng shadow MEC of roads and transport Fred Nel “promises” to get rid of all the “k****rs” from their Tshwane caucus.

In a screenshot of a WhatsApp conversation seen by The Citizen, allegedly between Nel and DA deputy chief whip in Tshwane Crezanne Bosch, the two were apparently on Friday discussing how they would “reclaim the region”.

Bosch allegedly referred to DA PR councillor and chairperson of the housing oversight committee Nkele Molapo as a “stumbling block” hindering the party from reclaiming the region.

In response, Nel said: “I know and I promised you that we will take it back. We just have to get rid of that piece of sh*t Nkele. Abel is nothing, we will deal with him tjoptjop.”

Abel Tau is the party’s regional chairperson in Tshwane and the only black DA ward councillor in the capital.

Molapo was subsequently suspended from the party caucus on Saturday morning after receiving a phone call from caucus chairperson Gert Visser.

Speaking to The Citizen, she confirmed that she was suspended after receiving a notice of intention to suspend on Friday morning, given 24 hours to respond.

“I have been suspended as a member of the DA Tshwane caucus, not the party or council. I received a phone call from Councillor Gert Visser … at 09:00 on Saturday morning, informing me that they had met as caucus management committee and resolved to suspend me from caucus.”

She could not, however, confirm the reasons for her suspension. Visser also did not respond to The Citizen’s calls and text.

But according to a source, the party fingered Molapo as a traitor, accusing her of feeding party information to their unstable ally the Economic Freedom Fighters.

Nel, however, repudiated the WhatsApp message, saying it was “all fake”.

Speaking to The Citizen, he said him and Bosch would be handing over their cellphones to the party on Monday for forensic investigations.

“It’s a fake message. We are handing in our phones tomorrow [Monday] morning for forensic investigations.”

Asked who could have fabricated the message, Nel said: “I don’t know who fabricated this. I would like to know.”

DA national spokesperson Solly Malatsi told The Citizen that the party was aware of the “fabricated text” and that Nel and Bosch have even offered to do a lie-detector test.

“The two members involved have sworn to the fact that it is indeed fake. They have even offered their devices (phones and laptops) for forensic investigations with a polygraph tests, if needed. The party will move to expedite this process as soon as possible.”

‘Broken Joburg can be fixed,' says DA mayoral candidate
6 hours ago
6 hours ago

‘Broken Joburg can be fixed,' says DA mayoral candidate
6 hours ago
6 hours ago