Former July winner has a 'wonderful temperament' and is ‘intelligent’, but ‘a little tricky’ when it comes to competition. Many people wonder what happens to racehorses in South Africa when they are no longer able to compete.

The well-bred entires (ungelded male horses) who have done well in racing go off to perform stallion duties at stud. The same is true for many fillies and mares who have good bloodlines, often irrespective of how well they did on the track.

But many male horses are gelded and if they cannot produce on the track, they get sold off. Some go to riding schools and find a second life in showjumping.

Today sees the running of the R4-million Premier’s Champion Challenge at Turffontein – and the winner in 2013 was Heavy Metal.

Following that victory, he moved on to contest the Vodacom Durban July at Greyville and made history when he got up close home to beat Run For It by a neck, making S’manga Khumalo the first black jockey to win South Africa’s premier race. 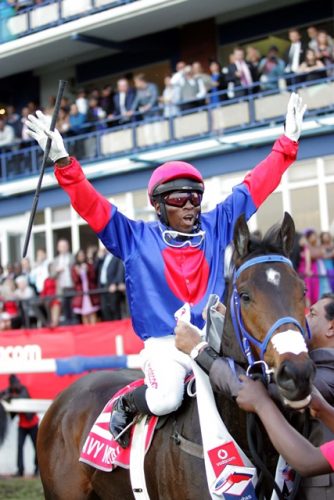 As a gelding, the son of champion sire Silvano had no future at stud so his connections decided to try him on the international stage and sent him to Dubai. He raced there three times but, sadly, could not replicate his excellent South African form.

Heavy Metal returned to South Africa where he raced eight more times but the best he could do was run fourth on three occasions.

As he was already seven years old, Heavy Metal was retired and sent to a stable in Kyalami.

A year later, Amy Coxon Gilliatt was in Johannesburg to participate in the South African Showjumping Championships and won the eventing title.

“My mom met his owner. He asked us to have a look at Heavy Metal because he felt he still had so much more to give.

“I went to the yard and got on him. He had only been ridden a couple of times in the indoor arena and had not done a jump in his life. So I took him over a small jump and he did it easily. He was so calm about it. He did so well,” said Coxon Gilliatt.

They were so impressed with his whole demeanour that they decided to take him.

Coxon Gilliatt, 17, is currently a Grade 11 pupil at St Anne’s Diocesan College in Hilton, just outside Pietermaritzburg, where she is boarder.

“I have been riding since I was about seven and have two horses. I love riding. My main discipline is eventing.”

Having a former Durban July winner as one of her horses has attracted far more attention than Coxon Gilliatt ever imagined.

“It’s surprising how many people have bet on him. Even all the grooms know who he is because S’manga was the first black jockey to win the July.”

One of the common practices of showjumpers is to give their horses a nickname. But not Heavy Metal.

“He hasn’t been nicknamed because if we did, he’d just be another horse. Everybody just knows him as Heavy Metal.”

Coxon Gilliatt admits he did come to them a little later than most horses and, while he is good jumper, he has not taken that well to the other disciplines.

“He’s probably too old for eventing as he is now 10. For showjumping he’s a good age.

“He came to us with no training at all but when I teach him new things, he is really intelligent.”

There is still much of the old racehorse left in this former champion of the turf.

“He is a little tricky when it comes to competition. A lot of thoroughbreds are taught to run but now he has to concentrate on other things and that took him a long time.

“Most racehorses who move to showjumping stop racing when they are three or four. He raced a lot longer and had a lot of adrenalin going into a race. But now he concentrates and performs when he has to.

“But he does have a wonderful temperament. He is so calm. When he sleeps you can lie down next to him and he is very relaxed.”

Coxon Gilliatt points out that many racehorses move into other sports.

“Thoroughbred horses do well in another events. Lots move into polo or polocrosse.

“We have four ex-racehorses and we really love them. My sister is the highest-ranked junior and she also rides thoroughbreds.

“Warmbloods are heavier and harder to get fit.”

Pocket Power, winner of the Durban July, the Met in Cape Town and four Queen’s Plates, was another who changed to showjumping after retiring, but it did take his new riders a while to get used to his quirky habits.

English Garden – winner of the Grade 1 SA Classic and, like Pocket Power, also trained by Mike Bass in Cape Town – has also performed remarkably well as a showjumper. 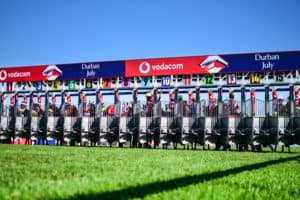 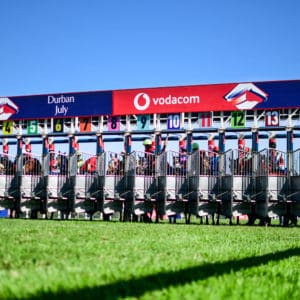