African leaders expressed appreciation to Ramaphosa for taking time to explain the situation in SA, which had generated concern in a number of countries. 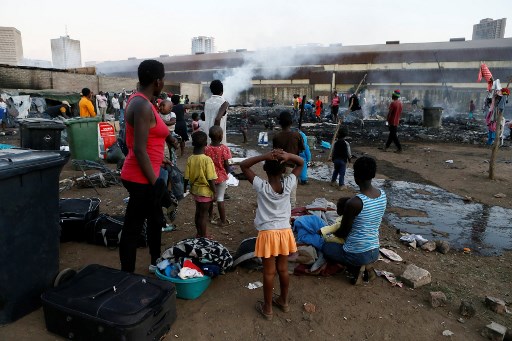 Foreign nationals sit and watch after their shacks were set alight by alleged looters at Marabastad, near the Pretoria Central Business District (CBD) in Pretoria, South Africa on September 2, 2019, during widespread attacks on foreign nationals and looting of their shops. Picture: Phill Magakoe / AFP

A team of envoys sent by President Cyril Ramaphosa to a number of African states to apologise for the recent xenophobic attacks that occurred in the country, have given a report to say all is forgiven.

Ramaphosa’s special envoys, led by Jeff Radebe, visited Nigeria, Niger, Ghana, Senegal, Democratic Republic of the Congo and Tanzania to give Ramaphosa’s apologies and a message of solidarity with the relevant heads of state and other people on the attacks that happened in parts of Gauteng and KwaZulu-Natal last month.

Ramaphosa came in for sharp criticism from some political analysts, individuals and opposition politicians for apologising to the countries concerned.

Congress of the People’s Dennis Bloem said the move was uncalled for. He said this was unprecedented, especially when citizens of those countries were smuggling drugs into South Africa to destroy the future of its youth.

“Ramaphosa’s apologies only serve to expose our sovereignty as very weak and leaderless,” Bloem said.

Yesterday, Ramaphosa received a preliminary report from the team of special envoys and the message that the leaders of the countries visited welcomed the South African delegation.

The leaders expressed appreciation to Ramaphosa for taking time to explain the situation in South Africa, which had generated concern in a number of countries.

“The heads of state noted with concern the irresponsible use of social media by certain individuals to create confusion and tension in the public mind. They also raised their concern about the reported causes of tensions between South Africans and migrants,” the statement said.

A number of the visited countries agreed on the need to adopt a common approach to deal with criminality, irrespective of the national origins of the perpetrators.

They resolved that their respective law enforcement agencies must collaborate to fight criminality in prisons, including intelligence gathering to pre-empt cross-border activities involving prisoners working inside prison facilities.

“The heads of state have welcomed the apology expressed by President Ramaphosa and pledged that the relationship between their countries and South Africa would be solidified, while describing the attacks as very unfortunate,” the statement said.

“The president believes this positive reception provides a basis for building closer relations and addressing the situation in South Africa. The special envoys will be dispatched to more countries over the next couple of weeks, including the African Union.”

The envoys also gave a message that government’s view was that such acts of criminality and violence represented neither South Africa’s values systems, nor the sentiments of South Africans, particularly against foreign nationals living in the country.

“South Africa remains a multicultural society that promotes interaction among people of different backgrounds, and remains an integral part of the African continent as it advocates for a peaceful, vibrant and sustainable Africa,” statement said.