Amatola Water Board to lead drought intervention in Eastern Cape

The province has experienced varying levels of drought since 2015, with extremely reduced rainfall during the traditional rainy seasons. 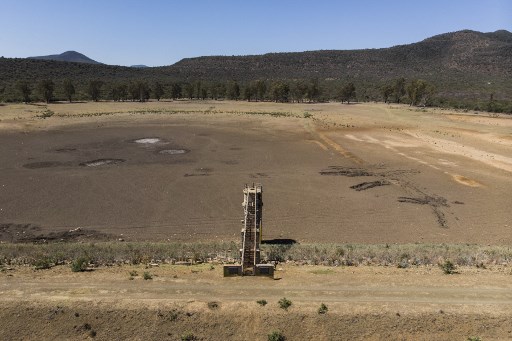 An aerial view of the Adelaide Dam with a 0% water level outskirts of Adelaide on November 26, 2019. Picture: Guillem Sartorio / AFP

Water and Sanitation Minister Lindiwe Sisulu has commissioned the Amatola Water Board to lead the drought intervention plan in the Eastern Cape, the board said on Monday.

In a statement, it added it was assigned to solve water shortage and infrastructure challenges in various municipalities to ensure adequate supply.

The board said a drought intervention war room was created to ensure proper communication between the national water and sanitation department, Office of Premier in the Eastern Cape, departments of cooperative governance and traditional affairs and rural development and agrarian reform, all district municipalities as well as the Dr Beyers Naude, Makana, Ndlambe and Sundays River Valley local municipalities.

“This intervention is not a blanket approach, it is customised according to the challenges facing each municipality. Municipalities have already submitted their needs to mitigate the drought situation.”

Short-term interventions include drilling and equipping of boreholes, water tanking, rainwater harvesting tanks, mobile plants to purify water in areas far from water treatment plants, and a rapid response unit made up of civil engineers, hydrologists, geohydrologists and other specialists.

These efforts would be complimented by water conservation and demand management, the board said.

In October, the Eastern Cape cabinet resolved to declare the drought a disaster.

The province has experienced varying levels of drought since 2015, with extremely reduced rainfall during the traditional rainy seasons.

This has resulted in reduced access to water in households and farmers struggling to irrigate their crops and look after their livestock.

Agri-Eastern Cape said last month desperate farmers would gratefully accept any help from the government but the assistance being rolled out was too little, too late.

“The whole process since the provincial [drought] declaration, which was a challenge in itself to get done, right through to the distribution has been chaotic,” its president, Doug Stern, said at the time.

The severity of the agricultural drought conditions was not the same, he argued.