Man arrested for drunken driving after baby is killed, 4 adults are injured in accident (video)

According to reports, an Avanza crashed into pedestrians in Phillipi, Cape Town, on Sunday morning. 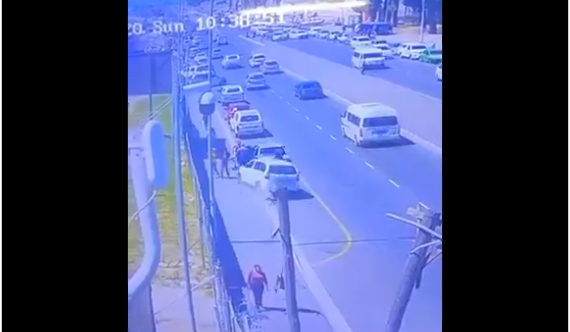 A screenshot of the video showing the accident in Phillipi.

A 27-year-old man has been arrested for culpable homicide and drunken driving after his vehicle collided into other vehicles, resulting in the death of a baby and the serious injury of four pedestrians.

Police spokesperson, Sergeant Noloyiso Rwexana said: “The accident occurred in Stock road, Philippi-East this morning. The suspect will appear in court once charged.”

CCTV footage has been shared on social media showing a vehicle that plows into pedestrians on the side of the road on Sunday morning in Cape Town.

The chair of the portfolio committee on Transport in the Western Cape, Angus McKenzie said the accident resulted in four adults and one baby being injured.

McKenzie said he had not received any reports on whether anyone was killed during the accident and that he was still waiting for further updates.

According to the caption of the video, the vehicle is an Avanza and the accident happened in Phillipi.