Government has been urged to phase out and eventually remove the industry entirely, which makes up less than 1% of the country’s gross domestic product. Tourism and conservation authorities have for the first time come together in a united call to stop South Africa’s thriving captive-bred lion and big cat industry.

Government has been urged to phase out and eventually remove the industry entirely, a call which has been signed off and supported by 21 lion scientists, and endorsed by 41 scientists.

There are a number of reasons why the captive-bred industry is unsustainable. From the welfare of lion farm workers to the potential damage to the country’s tourism industry, experts are reiterating and substantiating their reasons to impose a zero lion bone quota, and to kick the entire sector to the curb. 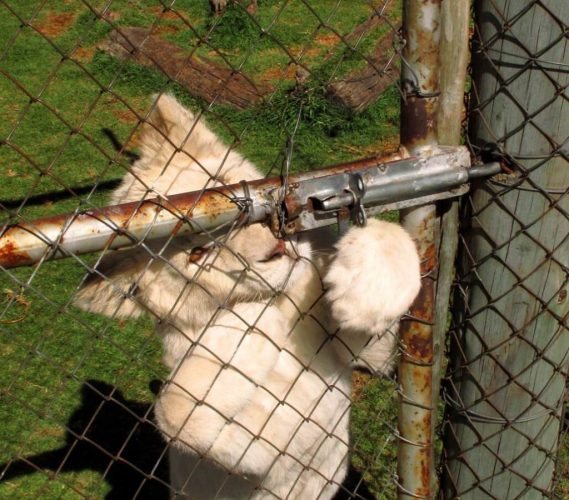 A cub plays with the lock of its enclosure in a captive breeding facility. Picture: Ian Michler/Blood Lions

Lion programme director at Panthera, Dr Paul Funston, emphasised in a webinar on Tuesday that there was no evidence to support the notion that captive lion breeding and hunting provided direct conservation benefits to wild lions.

There is also significant evidence to prove that there is a direct link between South Africa’s captive-bred lions and lion bone exports destined for Asia. The sector does not benefit farm workers either, with an estimated 80% of income generated from captive-bred facilities going straight to lion breeders and farm owners.

There is also a worry that the lack of safety within the industry could negatively impact lion farm workers, who regularly incur injury or death.

This is important, as economic and community benefits, transformation and equity are often used as reasons for the industry to continue. However, a lack of formal audits means it is not certain how many of these facilities exist. At last count, government said 366 facilities were in existence across the country, with almost 8000 predators in total.

De Waal said a recent study found a total of 63 pathogens in wild and captive lions, 56% of which were parasites, 17.2% viruses, and 11.17% bacteria. This had the potential to affect workers who were most exposed to the lions.

Farm hands, taxidermists, abattoir workers, those preparing skeleton bones, and meat being given to farm workers and their families present a host of opportunities for them to catch diseases and infections.

She appealed to the sector to stop breeding lions in captivity, for us to better work with existing populations, and preventing a mass euthanasia of captive-bred lions once the industry was canned. The world has lost 43% of its wild lions between 1995 and 2015, a figure that has increased sharply over the past five years. Lions face mass poaching, even in protected areas.

Interestingly, countries such as Mozambique and parts of Namibia noted the same period of significant lion poaching industries, which Funston said could indicate that countries nearer to South Africa were engaging in possibly illegal practices by forging ahead with their own wildlife trade syndicates.

There were also welfare concerns within captive-bred facilities, which were equally difficult to keep track of. Many issues concerning the welfare of lions and workers were not reported to relevant authorities.

Humane Society International (HSI) Africa wildlife director Audrey Delsink said the the mantra used in South Africa was to use wildlife and natural resources sustainably, for the benefit of all.

Experts say that the captive lion industry goes against that philosophy, which has a negative effect on tourism activities.

But in order to protect our competitive edge, bearing in mind that most tourists came to the country to see our wildlife, meant keeping our reputation clean. Delsink said that the captive-bred industry was known as “non-consumptive”, and only made up a small fraction of the country’s total tourism gross domestic product– 0.96%, or R180 million in 2019, as per the publications of Dr Ross Harvey.

A lack of transparency meant it was not known exactly how many people were employed in the sector, but indications did not point to this number being over 1000. There are better ways to upskill workers and get tourism numbers up, however.

Powers explained that tourism was an apex industry, with extensive trickle-down effects.

The slowing down of the sector could affect car manufacturing and even wine production.

South Africa also relied on the developed world as a tourism destination, which Powers said were wealthy people who had time to focus on ethical issues. She expressed concern that these people could abandon visits to South Africa in exchange for regions with more sustainable tourism practices.

“There is a definite shift in mindset to choosing ethical tourism destinations, and moving away from sensational tourism attractions. Other people’s perceptions become our reality, and determine our choices. You have to keep your eyes above the horizon on where the world is moving.

Funston said the market feeling in the captive-bred industry in South Africa was one that had the potential to grow “astronomically”. Not only will the country incur reputational damage, but its wild lion populations would be affected as well. He revealed that strong evidence suggested exports were being done illegally via neighbouring countries such as Mozambique. He said farmers had declared that if exports could not be done legally, they would be done illegally.

Delsink said the issue of captive-bred lions was raised as early as 2005, but that an audit on actual captive lion populations must be done.

“The market will dictate what happens, and farmers will make hard decisions for us, because they created this situation,” Funston said.

He and many others fear that the demand for products from Asia, which is “enormous” means the market will only increase.

But lion products were not for sale 10 years ago. This is why, he said, the sector must be curbed before it has knock-on effects, such as lion poaching, or risk experiencing a repeat of the current rhino poaching battle being fought.

“This is the beginning of a potential industry. What we can do to protect is to act now. We should’ve acted already, but we need to make a tough call.” Otherwise, we will regret not acting sooner, he said.

Covid-19 put an unprecedented cap on the amount of tourists able to amble through South Africa’s mountains, forests and bushveld.

And currently, tourism levels are at “almost zero”.

But as the sector begins to recover, it presents a shining opportunity for the tourism industry to correct itself before being on the brink of losing another prominent Big Five feature.

Morgan revealed that there were many parallels to be drawn with lion poaching and how it started with rhinos. He warned that authorities will struggle to curb lion poaching if it begins to surge.

This means South Africa not only stands to lose billions of dollars in tourism revenue, but also our rhino and lion populations.

HSI-Africa executive director Tony Gerrans said lockdown levels being eased has also resulted in a “business as usual approach”, with a “nasty uptick in poaching” being observed of late. HSI’s 2018 poll revealed that 65% of citizens were strongly opposed to the industry, and felt it was doing severe harm to South Africa’s international reputation.

The country has the power to curb another extinction threat to a much-admired animal, but our window is limited.

From poaching to Covid-19, to international wildlife trade markets, climate change and socioeconomic development – failing to solve any of the problems before long means South Africa will be poorer for it.