The birds were transported from the island to SANCCOB's seabird hospital where the chicks were weighed, hydrated and stabilised. 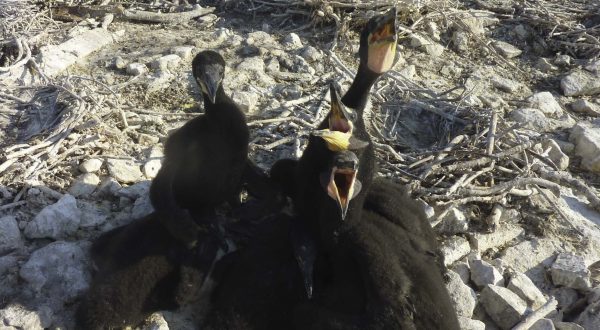 Nearly 1 700 endangered Cape cormorant chicks have been rescued from Robben Island after being abandoned by its parents.

In a joint effort by the National Sea Rescue Institute, the Southern African Foundation for the Conservation of Coastal Birds (SANCCOB), the Two Oceans Aquarium and other stakeholders, the birds were rescued on Tuesday after they were abandoned for unknown reasons.

SANCCOB researchers who had been monitoring the situation, initially thought the parents had flown out to sea to cool down from the hot weather, but after they failed to return, researchers suspect this was due to a lack of food.

“Cape cormorants feed mainly on anchovy (and to a smaller extent on sardines) and these small pelagic fish species are at very low levels at the moment.

“We are seeing dramatic population declines in all seabird species that rely on these fish species; the African penguin, the Cape gannet and Cape cormorant, are all listed as endangered by the International Union for Conservation of Nature (IUCN) and lack of sufficient food is the primary factor for the most recent declines observed,” said Dr Katta Ludynia, SANCCOB’s research manager.

The birds were transported from the island to SANCCOB’s seabird hospital where the chicks were weighed, hydrated and stabilised. Of those rescued, approximately 50 chicks died.

After hours of no return, Robben Island Museum’s Environmental Unit was immediately notified of thecbirds.

“Conservation is essentially central to Robben Island Museum’s mandate as a museum. Although Robben Island was inscribed [as] a World Heritage Site in 1999 under the category of cultural landscapes, fauna and flora form part of our valuable heritage assets and need to be prudently conserved and sustained at all times.

“We appreciate our collaboration with SANCCOB as it contributes in bolstering our efforts in managing the island as an integrated resource,” said Thabo Seshoka, Robben Island Museum’s Head of Heritage and Research.

The foundation said this was possibly the second largest seabird rescue in the Western Cape, since the MV Treasure oil spill in 2000, because there was an estimates 3,000 breeding pairs of Cape cormorants on the island and they usually had two to three chicks per nest which meant thousands more could still be in distress.

“SANCCOB is focusing its resources on providing the veterinary and rehabilitative care for the cormorant chicks until eventual release in two to three months, while simultaneously rehabilitating existing seabird patients.

“In light of this crisis situation, SANCCOB will need the support of the public to help in their fundraising endeavours to contribute to medication and fish for the chicks.”

Fishermen fear Karpowership plan could threaten their livelihoods
1 hour ago
1 hour ago
PREMIUM!

Fishermen fear Karpowership plan could threaten their livelihoods
1 hour ago
1 hour ago
PREMIUM!