At least 1 ton worth of lobsters died due to Red Tide, says department

The Red Tide has moved to the Berg River estuary, which is now at risk of marine mortalities. 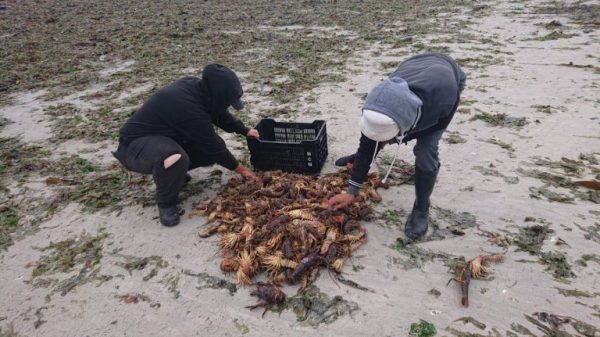 Around 1000kg of West Coast rock lobster died due to the Red Tide that took hold of the area in the Western Cape last weekend.

The Department of Environment, Forestry and Fisheries (Deff) said that since 16 January, there had not been more strandings, but warned that it was possible.

The tide stretched along the northern shores of St Helena Bay to north of Lambert’s Bay, before moving south. It is currently located off the Berg River.

Red Tide is a natural phenomenon caused by a buildup of microscopic algae. Some algal species are toxic to humans and other marine species.

Red tides also cause oxygen depletion, which affects all marine creatures and can lead to mass mortalities.

“The flow of the bloom into the southern region of St Helena Bay means that there is unlikely to be further lobster mortalities of significance, owing to he smaller lobster populations in that region,” the department said.

The Berg River estuary is now at risk of marine mortalities, however, Deff warned.

Members of the public are urged not to consume any fish or shellfish washed ashore due to the tide, as this could pose serious health risks.

Fishermen fear Karpowership plan could threaten their livelihoods
4 days ago
4 days ago
PREMIUM!

Karpowership: Energy diversification or setting of table for comrades to eat?
6 days ago
6 days ago

Fishermen fear Karpowership plan could threaten their livelihoods
4 days ago
4 days ago
PREMIUM!

Karpowership: Energy diversification or setting of table for comrades to eat?
6 days ago
6 days ago