President says His Majesty will be remembered as the staunchest defender of his people who advanced their culture, customs, traditions, and a deep sense of identity and nationhood. 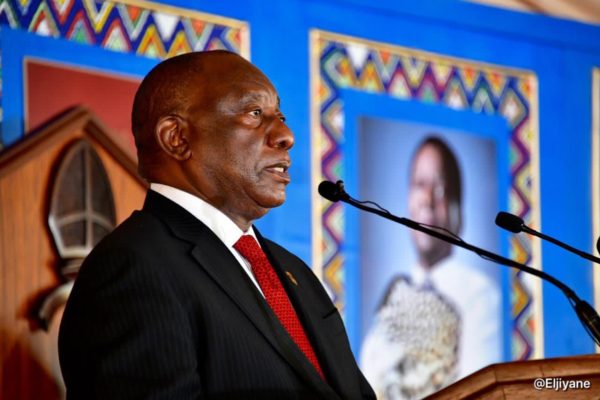 “During the tumultuous period of political transition in this country, he played a significant role in the achievement of democracy. The king will be remembered for his role in bringing peace and stability to KwaZulu-Natal during the difficult times our country went through,” Ramaphosa said.

“He abhorred violence and its consequences. As the country moved toward democracy, he called for an end to political killings, travelling around the country to encourage people to resort to peaceful means of resolving conflicts. His majesty was a man who believed that the pursuit of violence is ethically and morally wrong.”

The president delivered the eulogy at the official memorial service for the late king at the Khethomthandayo Royal Palace in Nongoma, northern KwaZulu-Natal.

OBITUARY: The life and times of Zulu King Goodwill Zwelithini

One of the longest-serving monarch of the Zulu nation, Zwelithini, 72, passed away last week from Covid-related complications while being treated for diabetes at a Durban hospital.

He was laid to rest on Wednesday night at a private occasion attended by men only.

Ramaphosa said King Zwelithini will be remembered as the staunchest defender of his people who advanced their culture, customs, traditions, and a deep sense of identity and nationhood.

“It is a difficult day because a huge tree has fallen. Our nation is indeed in mourning. It was with the heaviest of hearts that we received the news last week that our beloved leader and king after a courageous struggle succumbed to the deadly disease that has taken the lives of so many people,” Ramaphosa said.

“We have lost a revered leader who had the distinction of leading the Zulu people for half a century. The significance of his long reign and his legacy is not lost on us.”

Being in Zwelithini’s presence was a rare privilege, Ramaphosa added.

“He always exuded warmth, wisdom, and love for the people of South Africa and our entire continent.”

‘He carried his burden with dignity’

Meanwhile, Prince Mangosuthu Buthelezi – who is traditional Prime Minister to the Zulu Monarch and nation – said Zwelithini’s reign as king was the longest and God had granted him longevity, wisdom, compassion and foresight and courage.

“His majesty became the repository of the full history of our people. All our traditions, culture, indigenous knowledge, systems of governance and social structures are expressed through our monarch. He carried his burden with dignity,” he said.

Zwelithini always spoke out against social ills without fear or favour and led according to his conscience, he said.

“When he told us to heal our lands and plant our fields, he led by example.”

“We commit now to preserve his legacy fiercely, protecting our history, unity and identity.”

“We never thought he would leave us. He had put on a brave face even when he was sick because he didn’t want us to worry about him. He was brave,” princess Ndlovu said.

“It’s not easy to be here where we are today. He was a man of peace and I plead that we continue where he left off.”

READ NEXT: King Zwelithini’s ‘transition’ reminds us to return to our roots

Whose corruption is worse? Zuma or Ramaphosa's?
1 day ago
1 day ago

Whose corruption is worse? Zuma or Ramaphosa's?
1 day ago
1 day ago