The group of security guards, insourced in 2018, say they have been unable to claim unemployment benefits since their sacking a year later. 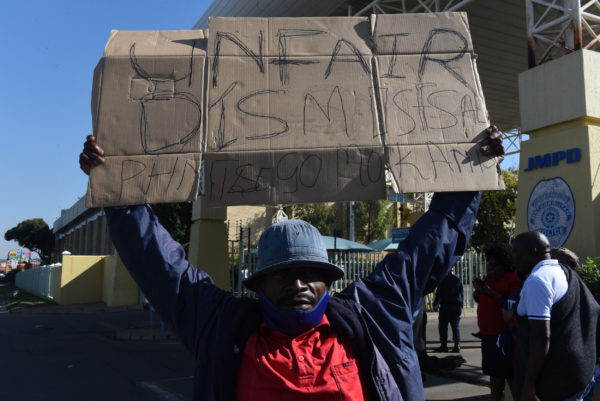 A small group of security guards, proudly insourced by former City of Johannesburg mayor Herman Mashaba in 2018, have been sitting without work for almost two years.

This after they were dismissed from these insourced posts almost immediately after Mashaba’s departure from the mayoral seat, for allegedly all having criminal records.

Despite having been dismissed, the 75-strong cluster told The Citizen they were not able to access grants because the system registers them as still being employed by the municipality.

These security guards said they were working at other government properties before they were insourced to work with the Johannesburg Metro Police Department (JMPD).

As a last resort, the group demonstrated outside JMPD headquarters in Martindale two weeks ago, desperate for answers. “Some of us could not be there because there is no money for transport. [The JMPD] said they don’t want to talk to us; that we are criminals.”

One of the guards is Sihle Ngobani*, who said he had been working with the JMPD as a security officer for over a year when he received a dismissal letter in 2019.

He had his name cleared by police in December 2019, receiving a letter confirming he had no convictions.

Despite this, he still lost his job.

The City of Joburg said in their response that the insourced security guards were dismissed after failure to comply with security vetting procedures. Questions directed to public safety MMC Mally Mokoena revealed that in October 2019, around the same time many security guards were fired for their “criminal records”, the City said it considered written representations made by security officers, but decided to terminate their services regardless, “with immediate effect in accordance with a fair procedure”.

The group then approached the Commission for Conciliation, Mediation and Arbitration (CCMA), citing unfair dismissal.

According to the City, SALGBC then ruled that applications were received “excessively late”, and that “officers were aware that their prospect of success in the main dispute are slim”.

Their application was then dismissed. The City said the security guards’ representatives have filed a review application in terms of Section 145 of the Labour Relations Act 66 of 1995, seeking the commissioner’s ruling be reviewed and set aside.

“The matter is now before the Labour Court and as such, the City cannot make further comment as it is sub judice”.

The security guards told The Citizen they questioned why they had been taken away from jobs to be put in new roles when the City already had their credentials on record.

Ngobeni said he had worked for the JMPD for one year and seven months before he was dismissed.

“Everything has been submitted to the Chief of Police. They denied those papers. We were working here and didn’t steal anything. We didn’t do anything. They pushed us out.

“We just want our jobs back.”

* Not his real name